And here she is…. 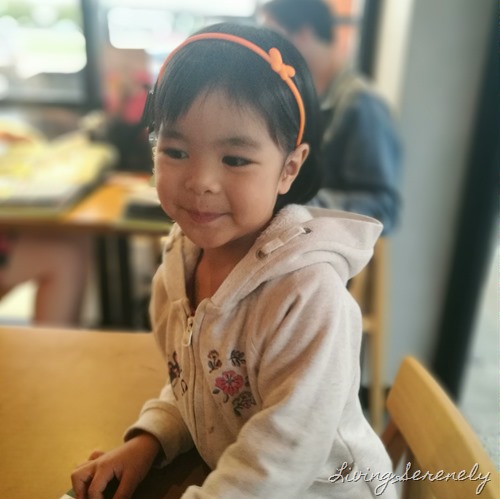 After months of talk of the big day…

“ …with a monkey cake

“ …the cake must be brown because monkey is brown

“ …and we must have banana sweets

“ …actually I change my mind

“ …I want a SUPERHERO monkey birthday!”

Everything finally came together in one small but happy celebration. 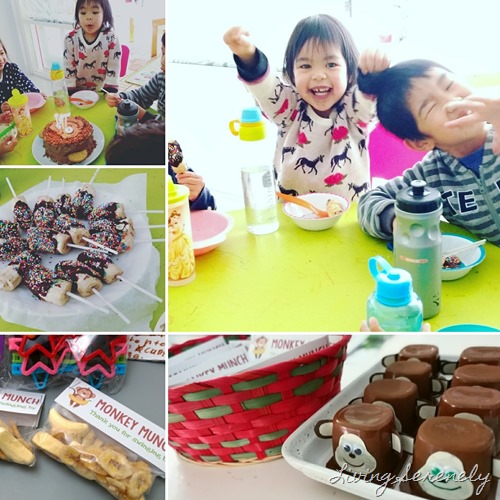 I have to admire the fact that despite the overwhelming influx of obsessive princessy talk amongst her peers, Grace did not waver one bit from her theme of choice. One must admire a girl with a mind of her own.

In the weeks leading up to the big day. I admit that I harboured some doubts over that mind of hers though. Where does one draw the line between ‘independent thinking’ and plain obstinate stubbornness?

She added a whole other level to the meaning of ‘tantrum’. Usually when her screeching and screaming gets out of hand, I will tell her to go to her room until she calms down. Her response varies widely from reluctant compliance to often wailing and pleading. On one occasion a week before her birthday she stubbornly refused to budge over an issue…

“Gracie, please go to your room now until you’ve calmed down.”

“I will speak to you once you’ve calmed down. So please go to your room at once!”

“Then I will stay in my room for A HUNDRED YEARS!!!”

[Proceeds to rush off into her room and slams the door. Hard.]

This, ladies and gentlemen, is a classic example of: The Threenager.

I was beginning to worry that all these were somehow indicators of a permanent particular bent in her character. But almost immediately after she officially turned four. It was as if a special switch inside her clicked into place. Her dramatic meltdowns began to mellow down. She still had her moments like everyone does. But the screeching and screaming started to cease.

And I could finally see how those tantrums were simply just indicators of particular quirks in her personality. Some of them still drive me slightly bonkers. But they are decidedly unique quirks for sure.

For one thing she’s obsessed with organising and arranging things.

Which only she knows the right way to do.

The plus side is that her room is in pristine condition compared to her brother’s. Items all stacked or lined up neatly on shelves. Floors clear of clutter. Bed neatly made.

The downside? Well… that is the bit that drives me nuts.

Because I too have my own particular way of arranging things.

I like them colour-coordinated in a particular way. With the throw rug strewn over the armrest in a deliberate yet casual manner.

And Grace? Well she has her own ideas of how the cushions should go.

So every single day it’s like a silent tennis match.

Grace wakes up to find the cushions arranged my way. So she proceeds to rearrange them. Around mid-morning I try to rearrange them as I routinely neaten up things around the house. After lunch it’s TV time, so Grace rearranges the cushions her way so she can sit back to watch her show. During naptime I usually leave it because I need a break. And it usually stays her way for the rest of the afternoon. In the evening after the kids are in bed, I start clearing things up and take the chance to give the cushions one final rearrangement. My way. Because it’s the end of the day. And I like going to bed seeing the cushions arranged the way I like. Then morning comes and it starts all over again.

Then there’s the matter of the bed. Grace is obsessed with neat beds.

The plus side is that she loves making beds. Including ours. So often, our master bed is neatly made up, courtesy of our in-house bed-making expert, Grace.

The downside is… well, how can I put it? It makes bedtime a pain.

You see, Grace needs to have all her sheets, pillows and quilt arranged absolutely perfectly. She takes her time to arrange her pillow and each toy and lovey, and smoothen down every corner of her quilt. And EVERYTHING has to remain perfect all the way while she gets under the covers. So sometimes bedtime can drag out for a bit while she stealthily tries to wiggle her way in gently from the opening at the top of the quilt. And not a single soft toy or lovey is allowed to shift out of place during this entire exercise. And when she finally manages to get her entire body under the covers, Nathan (knowingly) marches in and announces that he wants to jump in her bed to give Grace a big, hearty goodnight kiss and hug. And then all hell breaks loose.

There are other interesting facets to these quirks of hers… 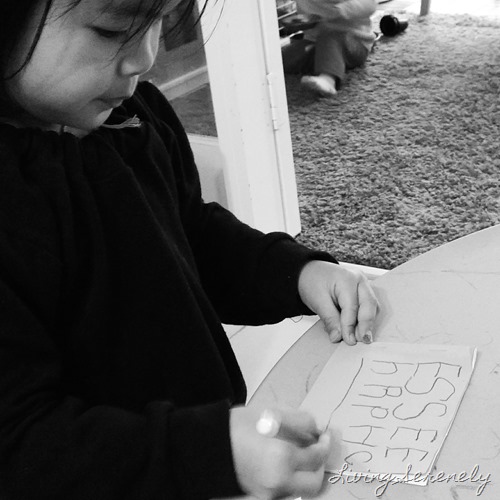 She enjoys writing letters. Repeatedly. She will fill a sheet of paper with them.

Her scissor skills are fairly advanced as she likes to have lines cut as neatly as possible.

She likes to separate different groups of food on her plate and eat them in order.

She is instinctively systematic in her method when assembling puzzles… looking for corner or side pieces, observing patterns in the shapes of the puzzles as she tests their fit.

She can sometimes get a little bossy with friends during play over how things should be arranged in their play house or various play set ups. Though she is learning to compromise.

She is very thorough and meticulous in her work. Such as colouring. She will fill every space thoroughly in marker or crayon or pencil to complete her work. 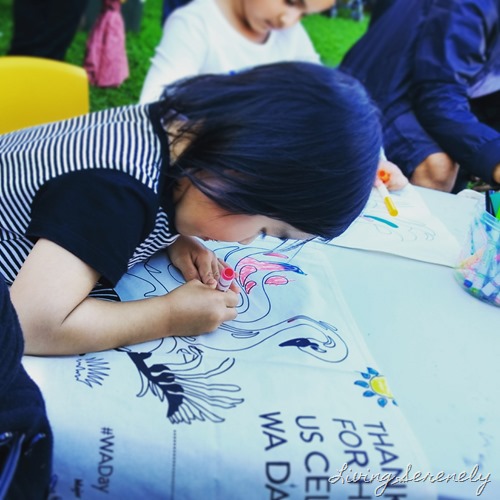 She pays great attention to detail. One time we decided to set up a puppet show and a couple of the children insisted that we must have popcorn. Grace immediately set to work making the popcorn. Using her own resourcefulness, she came up with the idea of drawing little cloudy puffs of popcorn on paper. And then using scissors, she meticulously cut out every single puff one by one until she filled a paper container. 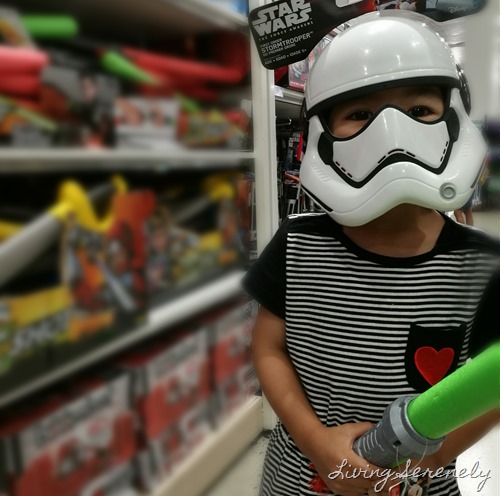 On the other side, she exuberantly joins forces with the boys in their play.

I have never ONCE seen her play the damsel in distress in any role play. The other girls gladly comply. But Grace will either be a sword-wielding princess galloping on a horse, a girl-firefighter, Wonder-woman, Supergirl, or lately she has taken on another secret identity as Black Widow (from The Avengers).

Although she is naturally drawn to books and shows featuring fairies and princesses, she keeps up with other boy-dominated trends such as Lego Ninjago, The Avengers and Star Wars (thanks to her brother). She can name all the main Lego Ninjago characters. She will tell you which of The Avengers are her favourite Marvel superheroes. And she guffaws along with Nathan as he watches episodes of his Lego Ninjago or Lego Star Wars series.

She is decidedly tough as nails and strong for her size. Other girls in the group usually leave the heavy lifting to her. And check this out. And this. Not even her brother could match her in this when he was this age. 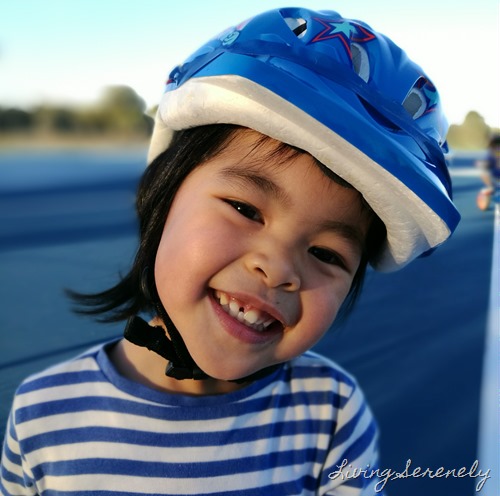