The real hobbies series: The art of Kombucha

And in a blink of an eye, we’re halfway through the year already!

Before the rest of the year slips through my fingers, I’d better get a move on some of the key things I wanted to get checked off my to-do list for 2016.

One of the ideas I wanted to try out in the bloggy space this year was to do a small series of feature posts on unusual hobbies or interests. It would be a very dull series if the series focused only on my own narrow range of projects. So I decided to turn to my cosy little network of friends to see some of the cool things they get up to in their spare time.

So without further ado, here is the first post of this series which will feature: The Art of Making Your Own Kombucha.

I first found out about kombucha from my friends Jon and Naryn when we went out to check out a raw food restaurant in Fremantle which apparently served up an amazing selection of their own housemade kombucha.

I then found out that Jon had been keeping himself busy brewing up his own house brand of kombucha at home. How cool is that? The next time we went over to visit him, Naryn and little Elliot, Jon showed us his little kombucha brewing station.

So who better to talk to than this guy to find out about making your own kombucha.

When Jon is not moonlighting as kombucha brewer, he works as a signalling engineer. His wife Naryn, works part time as an educational and developmental psychologist and they have an adorable little one-and-half year old toddler, Elliot. 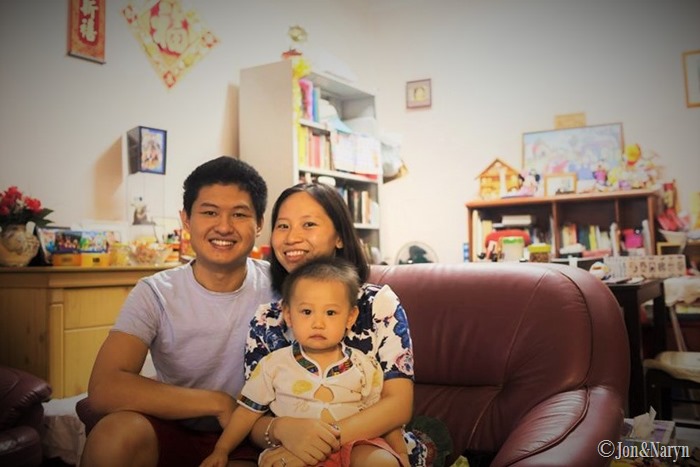 So what is kombucha anyway?
Well, in essence, kombucha is basically just fermented tea.

Tea? Fermented tea? I didn’t realise tea could be fermented.
Yeah! You can ferment pretty much any kind of tea… black tea… green tea… oolong…

So what’s with the fruit in the bottles?
Well, the different types of fruit basically make up the different kinds of flavours and variations of the kombucha.

And can you use any kind of fruit?
I think so. We’ve tried all kinds of fruit. Apple, pear, orange, strawberry, pineapple. Some fruits produce stronger flavours than others. And they also produce different variations on the colour of the kombucha as well. 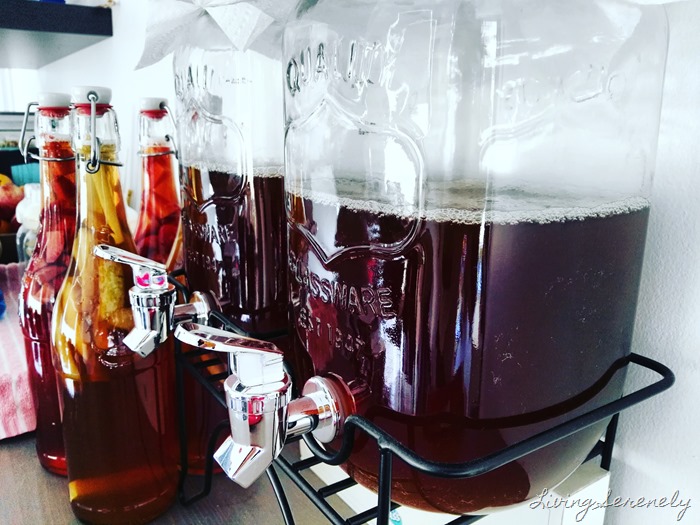 What are some of your favourite types of fruit variations on kombucha you’ve made?
Pineapple is really good. And it also produces a really great fizz. Orange is pretty good as well. We’ve tried blueberry as well which produced a really pretty colour, although the flavour is not as strong.

How about banana?
I have not tried banana. I don’t think it would work well though.

So basically more acidic and tart fruits seem to work best?
Yes, it seems so.

Okay, so what’s the brewing process like? How does it go? Is it very complicated?
Not at all. it’s actually surprisingly easy. The key ingredient you start with is something we call a scoby——which is sort of like a yeast starter. You can get it off someone else or even buy it online. I first started out with some scoby from a colleague. 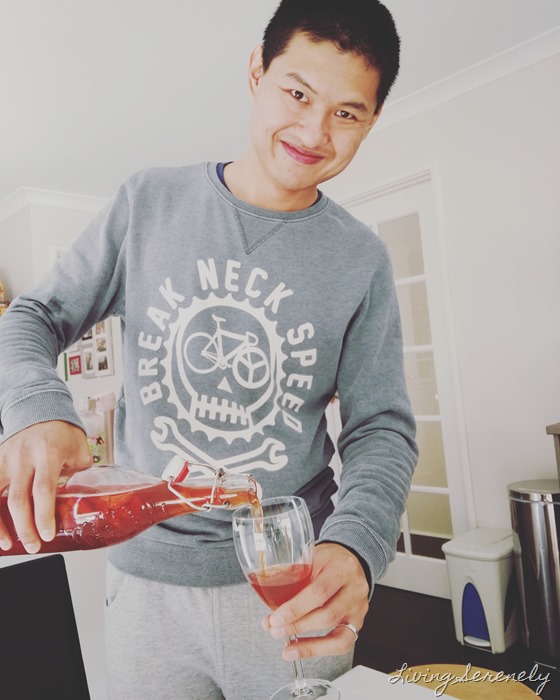 Really? So anyone can just give you some scoby?
Yeah! Like I could give you some anytime if you want to get started. It’s a byproduct of the fermentation process. I usually have so much leftover that I just throw most of it away. Some people even save theirs to dehydrate it into little discs and sell it online.

Right, so what do we do with the scoby next?
Okay, then you make a big batch of tea. I use eight bags of tea and soak them in a quantity of three litres of hot water and one cup of sugar. That is the optimal amount that works best for our own consumption. So that goes into the two large glass dispensers there together with one litre of leftover tea and scoby from the last fermentation.

How long does it take for it to ferment?
It depends. Around two weeks or so. It varies depending on the temperature and seasons. Usually much quicker in summer and slower in winter. It can get pretty tricky in the summer sometimes and some of the batches taste more sour because they ferment so quickly.

How do you know it’s fermented?
It’s a bit of trial and error. You will see a thick layer of scoby forming on top of the liquid. But I sometimes also pour a little out through the dispenser for a taste to check. 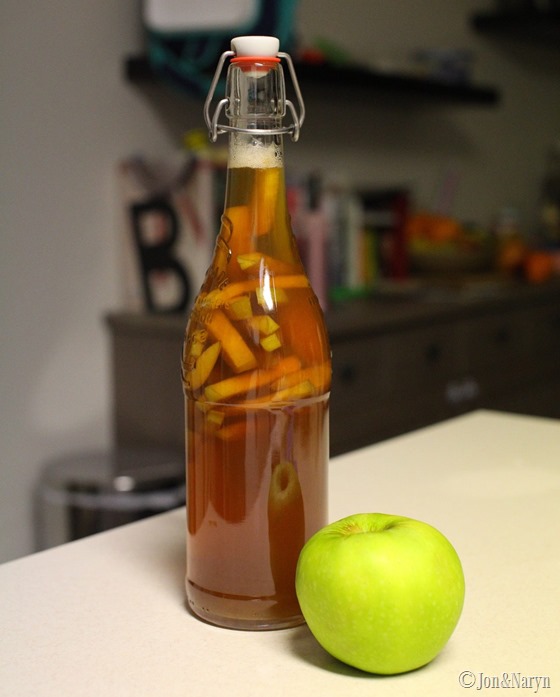 And after that you add the fruits?
Yes, when it’s ready I prepare the fruits by chopping them up into small pieces, decant the plain kombucha into bottles and add the fruit in. Then let the bottles rest for a couple of days to soak up the fruit flavours. And then store them in the fridge to stop the fermentation process.

So why kombucha? Is it simply because you like the taste?
Well, that’s one reason. But it also it supposed to have good health benefits for digestion.

Oh, like probiotics? No need for anymore Yakult.
Yeah, I think Naryn and I have definitely felt the difference ever since we started drinking kombucha on  a regular basis.

Have you let Elliot have a taste of some of your kombucha yet?
Not yet. He’s still pretty young I think. But for older children, a little bit should be okay. 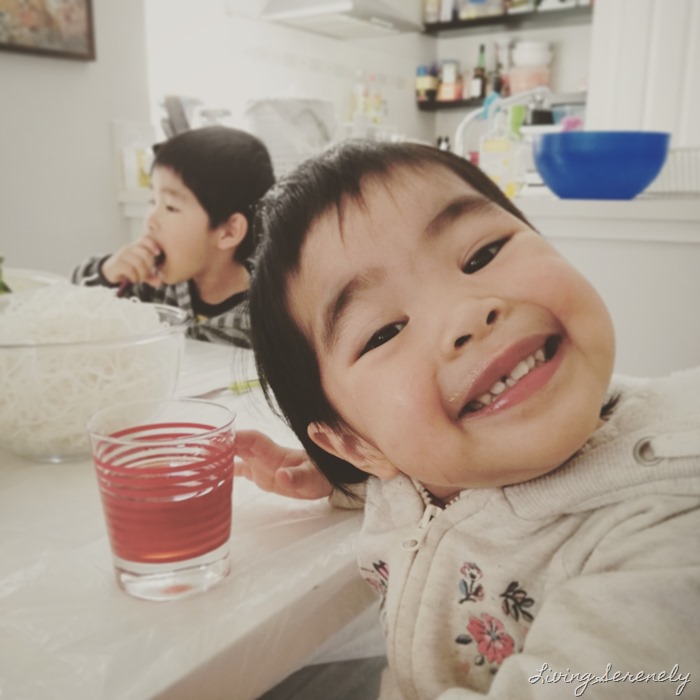 Grace and Nathan had a taste some of Jon’s strawberry kombucha. Grace especially went absolutely mad for it. I guess she really liked that flavour combo of sweetness and tartness. I read that kombucha retains a small quantity of caffeine and a teeny tiny level of alcohol content. So a little bit is okay, but not too much. Everything in moderation.

Thank you so much, Jon and Naryn!

If you enjoyed this post, stay tuned for the next post in this new series on real hobbies