I am just bursting with pride over my little man.

Do you notice something shiny worn by the cool superhero character in this picture below? 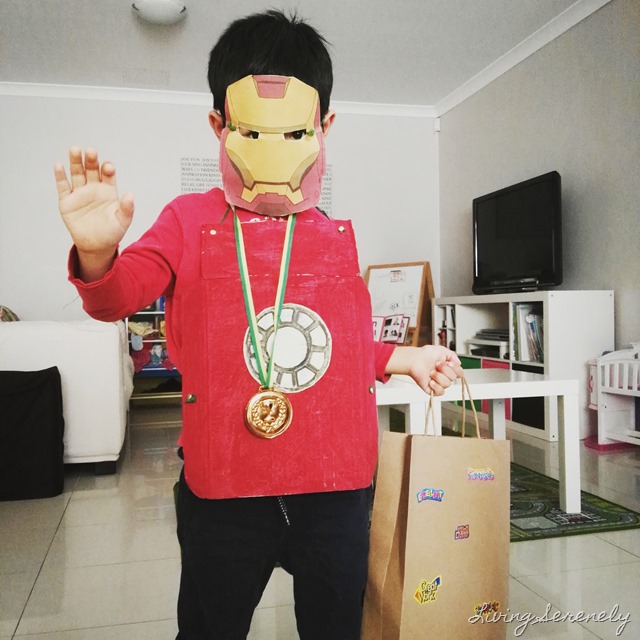 So this week was the cross country race event at Nathan’s school. For the pre-primary and lower-primary aged kids, the school had planned a ‘Superhero Fun Run’. No place awards for winners of the run, however prizes would be awarded for the three best dressed superheroes.

For the past couple of weeks leading up to the Fun Run, Nathan had been going on and on about what superhero he wanted to dress up as for the run. Iron Man.

Now being the practical mum, I gently tried to talk Nathan into dressing up as Spiderman since he already had  a terrific Spidey costume given to him by his grandparents.

Nathan a.k.a. ‘Tony Stark’ would NOT be talked out of it. His mind was made up.

However I was firm that I would not go out to buy a brand new costume just for this.

“But mummy, we can make the costume ourselves! I know how we can do it…”

Make the costume? My mind started racing through all the logistical options for making the costume. The materials. The fabric. The embellishments. The time.

“Really mummy, we just need to find some cardboard… cut out the shape for the body and then paint it red… I will do the painting… and then we can cut out a round thing for his chest…”

Nathan rambled on and on in detail of how we would assembly the various components of his costume. I was only half paying attention at this stage. I would just have to look on Pinterest later for some ideas.

“Okay… I’ll see what we can do… but I won’t have much time to do it all the time, so you’ll have to work on it bit by bit every day after school…”

Later on at home, Nathan started rummaging through our scrap box to find a piece of cardboard. He found one in the perfect size. He asked me for some red paint. I was busy getting the other little ones settled down for their afternoon tea, changing nappies and so on. But I decided that it would probably be a good little side project to keep Nathan occupied until I had time to look into it myself.

“Alright, here’s the paint. But you will have to do all the painting yourself…”

“I will mummy! And I’ll be really careful not to make a mess…”

He ended up doing a pretty good job with the painting. So we set it aside to dry in the meantime. The next day, Nathan checked on it and asked for another little something to add to his project. Almost every day after school, he would prompt me about the costume, asking for this or that.

And so the week passed.

His costume ended up looking pretty good. For a cardboard version.

But at the back of my mind, I was still thinking of sewing or putting together something a bit more ‘proper’. Though I didn’t say this out loud to him.

The last weekend before the Fun Run, I had planned to pick up some bits and pieces from the swap mart or make a stop at Spotlight for some fabric. However that weekend turned out to be the big winter storm of the season in Perth. So we stayed safely tucked in at home instead.

Finally on the day before the Fun Run, the best I could do was to find a red shirt to go with his costume and to give his teacher a heads up on his cardboard costume in case it happened to start raining or if he seemed to have any trouble running with the costume on.

Nathan wore his costume proudly to school that morning.

He didn’t bat a single eyelid at all the other store bought Supermans, Batmans and Ninja Turtles. We even spotted two other store-bought Iron Man figures.

Thankfully the weather turned out beautifully that morning. So I figured he would not run into any major issues with his costume. I just hoped the rubber band straps on the cardboard would hold up during all tat running.

Finally at the end of the day as I waited with my troops outside his classroom to pick him up… my little superhero emerged jubilantly holding up a shiny round medal around his neck and big prize bag.

“He won a prize for one of the three best dressed costumes!” his teacher called out.

“Oh yes! They saw the effort that must have gone into making the costume, and that was really what they were looking for!”

On the way home I told Nathan,

“Nathan, I am so proud of you for winning this prize. I remember how you told me your idea for making the Iron Man costume yourself and how you would paint it and cut out all the pieces to stick together. Even though I was busy and couldn’t help you all the time, you still did it.”

Nathan a.k.a. Tony Stark a.k.a. Iron Man grinned proudly from ear to ear.