Bizarre conversations that have been happening in our household lately…

“NO Grace! You’d better stop that! I mean it! Or I’m going to get The Lobster!” 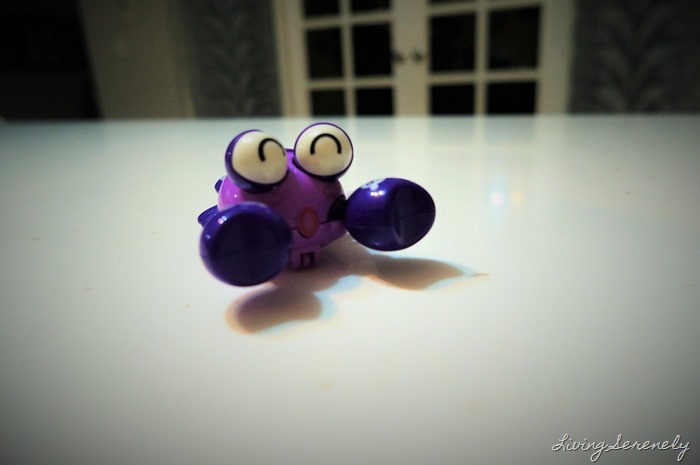 In case you’re trying to figure out what that is, it is a little purple lobster wind-up-toy.

It was a present from my brother and sister-in-law for Grace at their wedding in Singapore. Supposedly as a thank you gift to her for being the flower girl. And probably something fun to keep her amused at the reception. When you wind it up, it makes a funny buzzing noise as it rolls across the table or floor.

She refused to touch it or let it get anywhere near her.

I kept aside and forgot about it for a while.

One afternoon a few weeks ago, Nathan came across it among a box of toys. I picked it up and wound it up just for a bit of fun.

She ran away screaming her head off in pure terror.

Looks like she still had not gotten over her purple-lobster-toy phobia.

So I put the lobster toy away in Nathan’s room. Grace even insisted on shutting the door (supposedly to make sure the lobster would not escape).

We all had a good laugh over it and then forgot about the toy again for a little while.

Until one morning a couple of weeks ago. Grace was being a pain. The way two-year-olds can be sometimes. I can’t remember exactly what the specific offense was. Either refusing to comply with something she was supposed to do or doing something she was forbidden to do. Whatever it was, she was just refusing to budge. Nothing I said or did would move her.

After repeated rebuking and admonitions, I finally lost it.

In that moment of absolute frustration, I called upon…

Yes. I hate to admit it but it’s true.

I threatened my little girl with with the ‘thing’ she feared most.

It was a shamefully low blow.

[Don’t ask me what the deal is with the lobster eating her ears. I have no clue what that’s about.]

So now I keep this as my secret fall back weapon. When all other threats and admonitions fail.

[Allow me to caveat this post by stating that this is in no way considered ‘proper’ parenting methods. It is way off the textbook. In fact many would say this falls under the ‘what not to do’ category of methods.]

We all have our moments of desperations as parents.

It is kind of nice to have a fool-proof trick up your sleeve.

But I expect one day eventually Grace and I might find ourselves in a situation where we are at an impasse.

And we may have to negotiate a treaty.

That might be the day when I shall have to get rid of the purple lobster for good.

We shall wait and see.

For now, I’m keeping the lobster.

[What bizarre or unorthodox parenting tricks do you keep up your sleeve?]