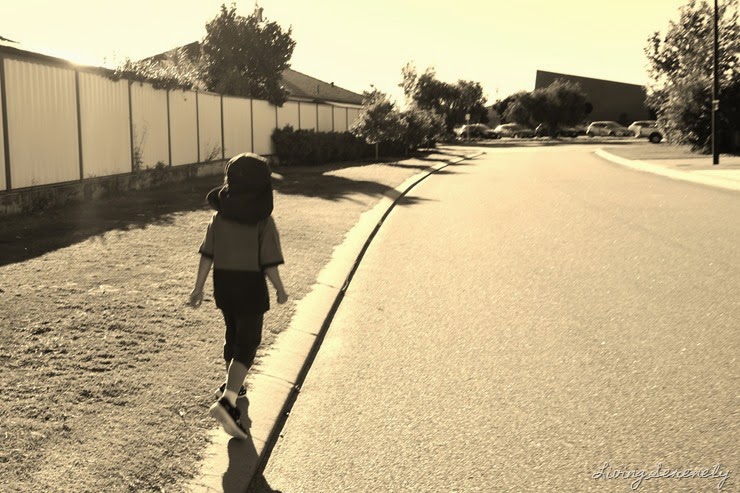 On one of our morning walks to school, April 2015

When Nathan started his first day of school, my heart was filled with misgivings and unease. My biggest worry was about all the other children in his classroom and what they would be like.

Would they be friendly?

Would they be kind?

Would they be nice?

Would they respond “Yes you can sit here!”

And “Yes you can play with us!”

My own first experience at kindergarten was far from terrific. I was made to sit at a table with a pair of very clique-ish girls who were downright mean and unkind to me. It was definitely not just one of those once-off acts of thoughtlessness or coolness towards me. It was outrightly wilful nastiness, condescension and deliberate exclusion towards me.  I remember dreading going to school every day because I had to face those two girls. I felt completely powerless and didn’t know who I could turn to. I didn’t know it at that time, but I was actually a victim of bullying. But I did learn one fact that I still remember to this day: “Kids can be so mean.”

So as the weeks went by in Nathan’s first term of school, I was over the moon when the stories he came back with were filled with names of all his many friends, of the fun games they came up with together, of who he sat with at lunch each day, and when he proudly declared to me at the end of his second week: “Timmy* is my BEST FRIEND!”

I’m quite sure Nathan will have many more ‘BEST’ friends in his life.

But it’s always lovely to hear those words every single time.

One day after school at pick up time, he ran up to me holding a little boy’s hand and proudly introduced his friend Timmy* to me. I caught up with his mother afterwards to introduce ourselves. “I’m so glad Timmy’s* found a friend. He’s so awkward. I didn’t think he would make any friends at all” his mum told me.

I looked at little Timmy*. It was difficult to say what was so awkward about him. He seemed just like a regular little boy. Perhaps a little quiet and shy. But that’s not really an unusual trait.

We continued to bump into each other every now and then, and always greeted each other warmly. Nathan continued to pepper his school stories with Timmy*, interspersed with names of all the other children in his class. He told of the times when Timmy* became upset. He told me about Timmy’s* special cushion he sits on during story and mat time.

And so the days and weeks hummed along routinely.

Before we knew it, the end of Nathan’s first term of school was here.

During the last week of the term, I met with his teacher who was full of glowing reports on Nathan’s cleverness with numbers, letters, and knowing his colours and shapes.

“He plays really well with everyone all around… both boys and girls” she remarked brightly.

Then she added, ““… and of course, he’s always so kind to poor little Timmy*”

I was starting to wonder about this little Timmy*.

Was there something I missed?

Common politeness held me back from prying too much into the facts. This seemed to be one of those situations where I was supposed to read between the lines and pick up the hidden meaning behind the words.

On the last day of the term, Timmy’s* mum came up to me to exchange phone numbers to arrange a play date during the school holidays. We chatted about how quickly the term flew by and about our respective parent-teacher meetings.

“I’m sure it was nice to hear all the reports on how Timmy* is doing at school”, I remarked.

“Oh yes. I guess he’s doing pretty well for his circumstances. Of course he has a little bit of a speech delay. But we knew that already”, she said.

“Oh. I would not have guessed that”.

“Yes. It’s quite obvious sometimes in his interactions with other kids as he can be so awkward”, she continued.

“Really? I couldn’t tell at all from the stories Nathan tells me about him and Timmy* playing together”.

That conversation pretty much filled in all the missing gaps in the story for me. And the thing that blew me away is that Nathan just exceeded all my expectations and hopes on his first term at school.

I was hoping that Nathan would be able to find friends who would be kind to him.

Instead, he was the one who was showing kindness to others.

I was hoping that the other kids he met would take the time to get to know him.

Instead, he was the one who had eyes to see beyond the outside of a person.

This is a whole different playing field I never saw coming.

Of course Nathan does not see it this way at all. He has no clue whatsoever about the deal with Timmy* and all the ‘facts’ as we call it. He’s just happy to have another friend to play with.

I should caveat this story by saying that Nathan is not some profoundly remarkable boy (except to me). He’s not showing any child prodigy tendencies (at least not so far). Overall he’s just a regular happy kid. He has his angel moments, as well as his less than perfect moments. So I tell this story not to gloat or brag about myself and my family. But simply to share my heart-felt happiness and pride.

Thank you for letting me share this story with you.