An early Christmas for me 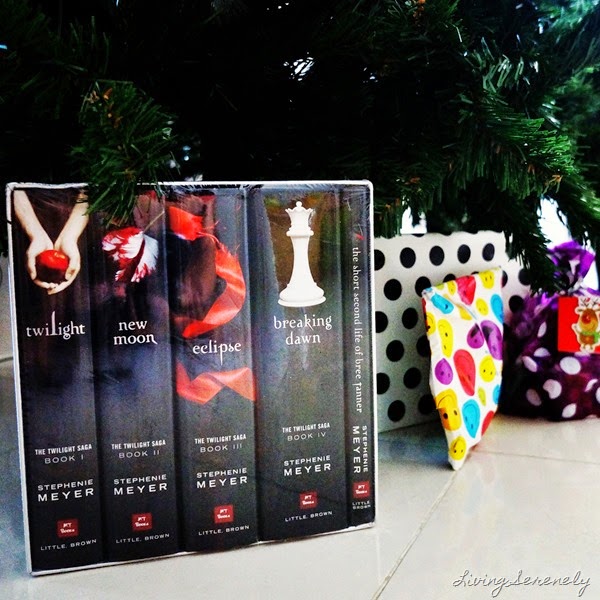 So Christmas came early for me this year in the form of a shiny new hardback set of this well-known saga.

As some of you might have known, I only recently discovered what the whole Twilight obsession was all about less than a couple of months ago. I happened to catch the first movie on TV while I was surfing around the channels one Saturday night and got sucked into the story.

I know, I knoooow… I am like soooo late for THIS party that I am arriving after the whole thing has long died down. Yes, I have heard of the Twilight Saga, but for one reason or another, the whole thing had evaded me somehow. It wasn’t because I was anti-Twilight or something. I was just probably busy with other things at that time while the whole party was going on.

Hubby must have obviously seen how captivated I was by the series. Being the sweet man he is, he quietly went and got the complete set of books that the movies were based on. Apparently it was no easy feat tracking down these books as I was really THAT late for this party. He checked out all the major bookstores in the city but could not track down a single book, except one sad little paperback set. So he ended up ordering this special hardback set from overseas.

He had intended it as a birthday present for me, but the parcel somehow got side tracked to some other part of the country, before finally arriving on our doorstep in a long roundabout way. I think he was so relieved that it finally got here that he handed it to me straightaway without even bothering to wrap it.

I think the thing that touched me the most was not the gift itself, but the fact that my dear hubby put so much thought and effort into getting it for me. So for now I’m leaving it under the tree, still wrapped in it’s cellophane packaging, just to soak up all the love and thought that went into this gift. But once I dive into the first pages, I know there is no turning back.

So the question is, am I in danger of turning into one of those Twi-moms, crossing over to the dark side?

Apparently, it seems to be almost an embarrassing and even shameful thing to admit to reading or (God forbid) actually enjoying these books. They are certainly not Shakespeare or Austen or Dickens or Tolkien, any of the books on this list, or any other intelligent novel you would proudly hold up high as you read on the train commute to work.

I remember as a teenager in school, secretly reading school-banned teen novels like the Sweet Valley series, R.L. Stine, Christopher Pike. We snuck them in by hiding them between sheets of paper or textbooks. Such exciting times. I have a feeling this whole Twilight Saga series would be reminiscent of those teen novels I enjoyed reading back then. And I feel I could use something fun, easy and indulgent to read this holiday season.

So, anyway this shall be my last post for the year. No big roundup post from me this time, just a big wave and a cheery ‘Happy Holidays!’ from me. And in between all the festivities and merry-making, I suspect I’ll have my nose buried in my new guilty pleasure holiday read.

Have a beautiful Christmas everyone, and a wonderful start to the new year!