What do you really mean by ‘sharing’?

What do you think of the term ‘sharing’?

More specifically in relation to children ‘sharing’ things with one another. 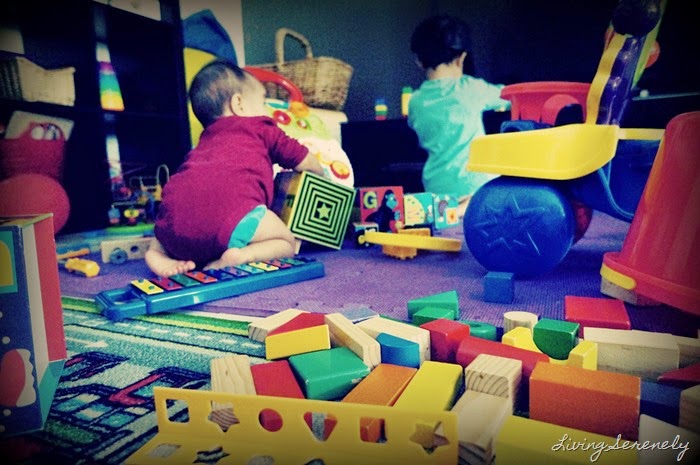 I personally think we adults use the term ‘sharing’ a little to flippantly. I have been guilty of it myself at one point or another, although I am practising to be more conscious about when and why I decide to use that term.

Sometimes I think parents use that term with children, simply to get a child to give up a toy or object to another child, without much regard for their rights and feelings.

Strictly speaking, if you were asking a child to ‘share’ something, it should either mean:

#1. Playing with the toy or object together, or collaborating in some way to use it jointly as a team;

#2. Finding a way to divide the item(s) fairly so each person can have a share of it (such as with food or a pile of blocks).

However from personal experience, whenever I had a ‘sharing’ encounter with another parent, their desired outcome often had nothing to do with any of the above options.

A few months ago during a party at a friend’s house, I was sitting near the play area where the kids were, keeping an eye on little Grace. Nathan was fully occupied in exploring the various toys at our friend’s place. He found a toy mobile phone immediately started playing with it happily, pretending to talk on it, pressing the various buttons and so on. Another child saw the toy mobile phone Nathan was playing with, and started whining that she wanted it. She even tried several times to reach out and grab it from him. Nathan naturally held the toy phone protectively and moved away each time.

The other child started getting upset and continued whining for the toy. Her father who was sitting nearby observed how upset his child was getting. So he said, “Nathan, can you share the phone with Natasha*?”. Nathan looked at me uncertainly. I responded “Uncle X is wondering if Natasha* can have a turn with the phone, are you finished with it yet?”. Nathan shook his head and said no. “Okay, when you’re finished with it, can you let Natasha* have a turn”. Nathan responds“Okay mummy” and continued playing.

The little girl became more upset at not getting her way. Her dad tried to pacify her with other things but was unsuccessful. So he calls Nathan again and asks, “Nathan, can I have a look at the phone you are playing with?”. Nathan looked uncertainly again at me. I chose not to say anything at that point to see where this was heading. Nathan tentatively holds out the phone to the girl’s father, who takes it from Nathan, then immediately hands it to his daughter. Nathan became very distraught when he saw this.

I was quite taken aback when I saw this but continued to remain calm. “Oh, Nathan, were you not done playing with the phone? You can tell uncle ‘I’m not done with it yet'.” Then I turned to the father and said “Sometimes little children tend to give into adult authority even though they may not understand at first what is happening”. The father was mindful enough to quickly retrieve the phone from his daughter and give it back to Nathan (although his daughter was definitely not pleased about it).

Afterwards, I managed to find another toy phone which I gave to the little girl to play with. And later on when Nathan was done playing with the phone, I reminded him to pass it to the girl as well.

At another friend’s party some time back, Nathan was happily playing with various toys at our friend’s place. He found a toy wand and picked it up to play with it, pretending he was a magician, a soldier with a sword and so on. Another child then found another similar wand and began playing with it as well. A third child in the group who was a close friend of that child ran alongside them both, playing together.

The parent of the first child observed their child with the wand, but that the friend did not have a wand. They then saw Nathan playing with the other wand. So the parent asks Nathan, “Nathan, can you share the wand with A* and let A* play with it?”. Nathan paused uncertainly at this point. The parent then walks over to Nathan and repeats the request and holds their hand out for the wand.

So Nathan reluctantly lets go of the wand. The parent then gives the wand to the other child. The two children skip off together happily playing with the wands. Thankfully, Nathan was resilient enough to move on and look for another toy to play with. I was rather stunned with this episode but at that time, I wasn’t sure quite sure how I could have intervened without offending the parent.

(*Not the real names of these children)

Perhaps these incidents happened simply because Nathan and our family were not a core part of the groups we were hanging out with. Even so, I think that children deserve as much respect as adults and their rights should be treated with as equal importance as anyone else.

If you ever found yourself in a situation where wanted a child to give up a toy they were playing with simply because you wanted your own child to have it --please think twice. I believe the simplest thing we can do is to try and imagine how it would feel if that child was our own. Here are some helpful phrases you can practice with your child if they are finding it challenging to wait to play with a toy.

I know this is the mama bear side of me coming through a little here. So I’ll round off things off with this uplifting quote…

The older you get,
the more you realise that
it isn’t about the material things,
or pride or ego.
It’s about our hearts
and who they beat for

A couple of articles to help further clarify the term ‘sharing’…

P.S. Then again, there is also another higher calling beyond this perspective. Please read this other perspective written by my dear friend.