So last month in September was the traditional Chinese Mooncake Festival. I have many fond memories of this festival from my childhood, including indulging in many slivers of sweet mooncakes and parading around the neighbourhood with candlelit lanterns by the light of the full moon.

There are many stories on the origins of this festival. The one I remembered most of all was the legend of the hero Hou-Yi who shot down nine out of the original ten suns in our sky, and his wife the Lady Chang-Er who drunk the magical elixir which caused her to float up to the moon where she remains to this day.

As part of the cultural heritage focus in my family day care, I decided to feature some activities around this festival during the week. I even prepared a felt board story to illustrate the legend of the Moon Goddess, Lady Chang-Er. I even made a mini bow and arrow out of a popsicle stick for Hou-Yi to shoot down the nine suns.

Nathan was absolutely captivated by the story. Almost every night during that week, he kept looking out his window at night to see if he could catch a glimpse of the Lady Chang-Er in her Moon Palace.

We also made some paper lanterns and hung them up add a festive air for the occasion. I was quite impressed with Nathan’s scissor cutting skills during this activity. Most of the slits in these lanterns were cut by Nathan. I focused primarily on the stapling on the lantern handles while the younger children decorated the lanterns with swirls and lines using markers and crayons. 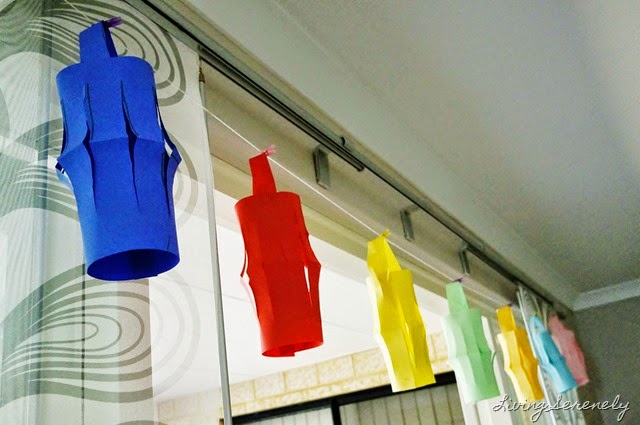 I had planned to let our children stay up on the eve of the Mooncake Festival to go out for a moonlight walk with real lanterns. But unfortunately the weather ended up being terribly unkind to us. Stormy, pouring rain and howling wind.

So instead, we settled on an indoor lantern party.

We turned off all the lights to set the mood. I set out my homemade snowskin mooncakes on the table and hubby helped to light up the lanterns for everyone. 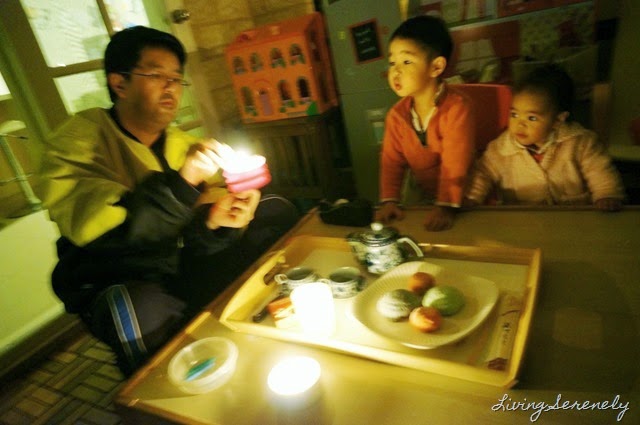 Nathan was a little disappointed that we could not head outside to look at the moon and see if he could spot the Moon Goddess. But I think he was cheered up over the privilege of holding on to a  real candlelit paper lantern for the first time. We’re talking real fire! 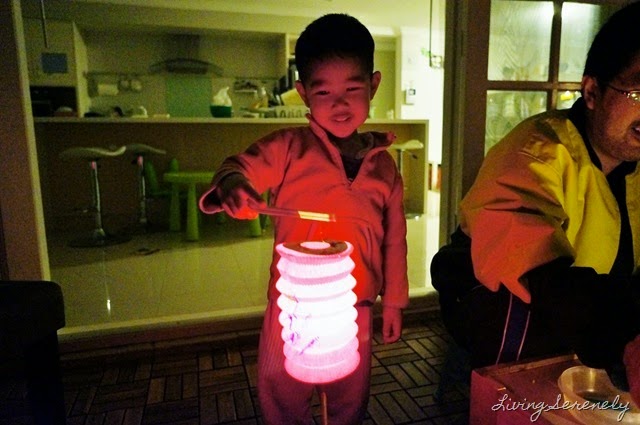 Unfortunately Grace couldn’t be trusted to hold her own lantern yet. Maybe next year. But she was perfectly content with munching away on the snowskin mooncakes. I hope the weather turns out better next year so we can head outside for a real moonlight walk next time.