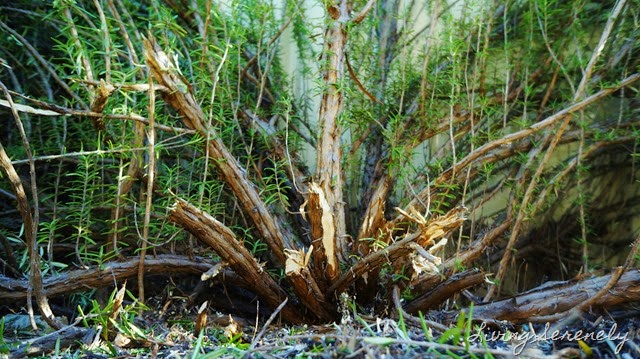 For the longest time, we have let our rosemary bush in our backyard grow out of control.

We had planted it in quite a prime spot in the garden because I thought it would be nice to have easy access to fresh rosemary whenever I needed it for recipes and cooking. And we were told that rosemary would a terrific herb to plant as they are very hardy and easy to grow.

Little did we know the monster it would grow into.

The biggest problem was that it became somewhat of a hazard and kept growing across the walkway leading to the backyard and play area. Quite dangerous for little children, actually.

I decided that it was finally time to destroy this monster.

It was a pretty scary looking thing actually. The top of the bush stood even higher than our fence, and it had creepy octopus like tentacle-like branches extending out everywhere.

I got out our pair of garden shears (it was all we had) and started hacking away at the branches one at time. It was simply pathetic. At the rate I was going, it would take me a whole year, hacking away at it like that.

So I called my brother-in-law and asked to borrow his chainsaw. This time I would go back into battle, guns blazing.

I had never used a chainsaw before in my life. The only high powered gadget I’ve used was my food processor.

However I was really determined on getting rid of that rosemary bush as soon as possible. So I geared myself up with gloves and goggles, hoisted up the chainsaw and revved up the motor.

I angled the saw against a branch and pushed the running blades against it and in less than two seconds, it was sawed off. Wow!

It was quite a thrilling feeling watching each big ugly branch from that bush fall off effortlessly one by one against the whizzing blades of that chainsaw.

I felt strangely powerful wielding this weapon in my hands.

So what’s the point of this story?

Nothing really. I just wanted to share how much I enjoyed using a chainsaw. But rest assured that I shall only be using it strictly within the confines of my own garden in my backyard.

What’s the most powerful gadget or machine you’ve handled? Did you enjoy using it a little too much?

Linking up to Jess at IBOT