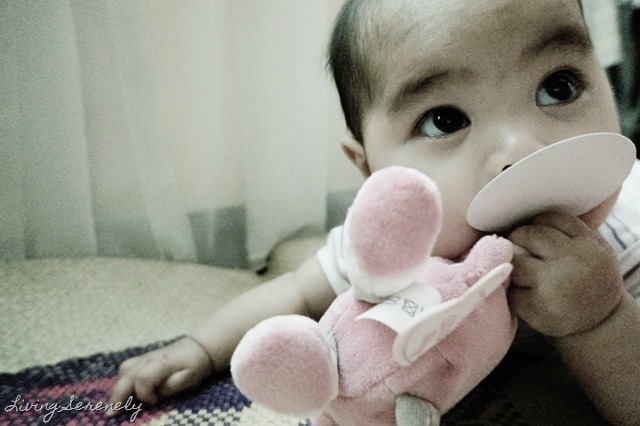 It’s hard to believe, but I just realised that we are now over half way through Grace’s first year. She officially turned 6 months a couple of weeks ago and is developing so fast that I’m barely able to keep up with her updates here.

Since the last update I posted, she has really been stretching herself all over the floor. Not only rolling and flipping, but pivoting and even lunging and creeping forward to reach for objects. Yes, the crawling has begun. And boy can she move.

She is constantly on the prowl, reaching out and grabbing everything she can get her hands on.

Hair, glasses, her fingers, our fingers, her toys, her brother’s toys, scraps of paper, scraps of anything really… nothing is safe within her reach.

Whatever she gets her hands on, the first stop it makes is straight to her mouth.

And then she chomps on it. Hard.

She really is such a voracious chomper.

I know all babies generally like to mouth or suck on objects. But I am convinced that Grace’s chomping action is on a whole other level.

Watching her chomp on a toy is like watching a tiger handling it’s prey on the discovery channel.

First she grabs a toy or object, brings it to her mouth, then chomps down on it hard and ferociously shakes it from side to side with her gums. Once she’s done with it, she flings it’s poor mangled carcass aside and proceeds to pounce on her next victim.

Sometimes while nursing her, she can chomp down on me too. Very hard. Very ouch.

I can’t imagine how things will be once her teeth come in. *Shudder*

Linking up to Sakura Haruka,
Little Drummer Boys and
Twinkle in the Eye