Our toilet training journey so far

October 03, 2013
After my first initial foray into toilet training, it's been a slow and winding journey. We've had several false starts and countless accidents along the way.
But recently in just the space of the last couple of weeks, we've finally found our groove. Nathan is now semi-officially nappy-free (except for naps and night time).
When my mum was recently here to visit, she took the opportunity to give Nathan an intensive toilet training boot camp. She excitedly talked up the potty experience, meticulously guided and prompted him to take toilet breaks at frequent intervals and patiently cleaned up numerous accidents.
However, progress was still slow. He didn't seem at all bothered about the wetness and mess and had to be constantly reminded and dragged to the potty to make a deposit every single time... and he would rather let an accident happen and continue playing than stop to answer the call of nature. 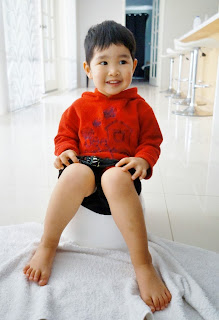 But a few weeks ago, I noticed a great improvement in his toileting. He was regularly responsive to my potty break reminders (no fussing, nagging or dragging required) and his nappies were always dry at each toilet break.
We were on such a perfect streak, so on a whim one morning I decided to take off his nappy and let him try wearing undies again. As the weather was now turning so nice and warm, I let him run around in just plain undies to make it easier to pull them off and on by himself.
We started with two accidents on that first official undies-only day. Then one accident the next day. And then we were pretty much accident free on day three onwards. There was an odd slip up here and there. But it's been now over a week, and I think I can confidently say that we are finally on a roll.
I'm really proud of my little man for finally stepping up to the plate and being so initiative and positive about the whole process.
I don't claim to be an expert, but I thought I'd share some of the little things we did which I think helped in our situation:
The next step for Nathan's toilet training would be to practice using the 'big' toilet, then try going nappy-free outside the house, and after that move on to going nappy-free for naps and eventually through the night.
If you have any tips on moving on to toilet training for naps and through the night, do share them with me.