July 23, 2013
So it's now close to two weeks since the arrival of little Grace. Only two weeks but it feels like a lifetime ago. Once again we have stepped into another new era.


People have been asking me whether labour this time round has been better than last time. I'm rather stumped as how to answer this. How does one define the word 'better'?
All I can say is that it was definitely very different  from the first time round...
Despite the pain, I would say it was kind of an empowering experience. I pretty much went through it completely bare-faced and unarmed and felt full force of the pain of labour piercing through every fibre of my being.
Read on for a full recap of what happened...
~~~

Baby Grace was overdue by five days and as discussed earlier with our obstretician, we had agreed that if I had not popped by that time, I would undergo a simple induction to get things going.
The procedure itself was very simple. All the doctor did was to apply a special kind of gel into my cervix to soften it, which would gently kick-start my body into labour.
After applying the gel, they wheeled me into a ward to rest quietly while waiting for things to happen. Hubby and I agreed that he should go home and get some rest and return in the morning when the action would have started.
A couple of hours later, I started to feel mild contractions which gradually grew stronger. I had a TENS machine which I put on and rode through the contractions with it for an hour or so.
By then the pain was getting really strong, so one of the midwives gave me a small dose of morphine to help take the edge off the contractions so I could rest a little.
Another hour ticked by before the morphine wore off and the contractions flooded in much stronger than before. I called hubby to come back to the hospital.
By that point I was bent over, kneeling on the bed, desperately bearing through each wave of contraction as it hit. Hubby had returned by this point and was holding me from behind for support. I decided to blast myself with some hot water in the shower to distract my mind from the pain.
So there I sat in the bathroom, with the shower on full hot water. Each contraction just shook me at the core of my being. I found myself humming familiar hymns and choruses through each wave.


A midwife finally came in to transfer me to one of the birthing rooms. The contractions were now so close together that there was hardly any time in between each one to catch my breath. All I could do was lean my head against hubby and concentrate on each contraction one at a time.
At this point I was ready to ask for an epidural because I didn't know how much longer of this I could stand. The midwife then examined me and was surprised to find baby's head already pushing out right at the entrance of my cervix.

"No time for anything else, Serene... baby's head is right there so it's time to get going!"

I was so dazed from the pain. But this time with each contraction, I realised I was having that 'urge' to push something out... like I needed to do the biggest poo in my life. The pushing part now at least gave me something to focus that I was not thinking about the pain as much.

After several pushes, I finally felt her head emerge out, followed by a 'slithery' feeling of the rest of her body slipping out. 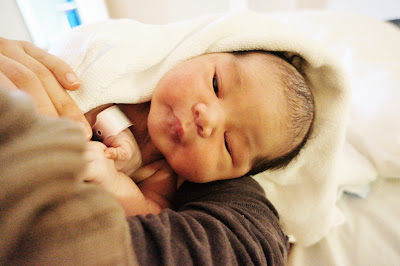 And just like that, the pain completely melted away as I found myself with a tiny velvety little creature snuggling up on my chest.

A friend from church recently called to offer his congratulations...

"So how was it this time? Did you get an epidural?", he asked.

"No I didn't, there wasn't enough time anyway as everything happened so quickly"

"Wow, really? You are so strong!", he remarked.


"I didn't know how strong I was until now!", I replied, laughing.

And it was true. I felt I had now joined the silent ranks of mothers before me who have journeyed to the edge of our being, reaching a deeper primal level within ourselves that we never knew existed inside us.


Of course I understand that there is a different kind of pain that those who have to undergo c-sections or need to have an epidural (as I myself did the last time) have to endure.