July 25, 2013
Apart from asking me how things have been going with baby Grace, friends and family have also kindly been asking how Nathan has been doing since the birth of his new little sister.

This issue has been one I have been struggling with throughout my pregnancy: How would Nathan react and cope with the changes to our family with the addition of a new sibling?

Right up to the last moment as I was about to leave for the hospital, I was still feeling wistful and apprehensive about the whole thing. As I knelt down to say good-bye to Nathan and explain to him where I was going, I could feel the tears welling up in my eyes. He is such a good boy and I love him so much I could burst... but what will things be like when I come back holding a new baby in my arms?

The day after my delivery, hubby and mum stopped by the hospital with Nathan bounding happily beside them. He was clutching a little package of pressies we had prepared for him to give to his little sister, including a little card he had made for her at daycare.

He peered curiously at little Grace, nestled sleepily in my arms.

Then the first thing he asked was, "Can I touch her?"

"Of course you can!", we exclaimed.

We watched him gently pat Grace's head and stroke her soft downy hair.

After that he got preoccupied with his special present --a new toy truck 'from' baby Grace. But I loved watching that magical moment of him meeting his little sister for the very first time.

Since then Nathan has just been incredible with the baby. He is so affectionate and excited over his new little sister, often asking to carry her, and loves sneaking little kisses and nuzzles all over her eyes, nose and cheeks. 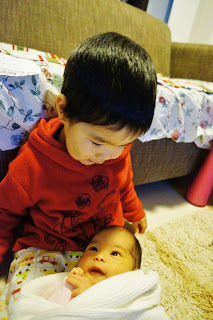 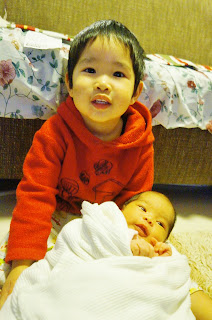 Of course there are moments where I sense a little apprehensiveness over having to share lap time with mummy. But overall he's proving to be an awesome big brother, and I am so looking forward to seeing their special brother and sister relationship grow in the years to come.