I mentioned in my last post that one of the biggest questions going through my head is about Nathan and his relationship with the new baby. Managing sibling rivalry/jealousy is generally one of the biggest topics and FAQs in all the parenting forums related to preparing for a second baby. 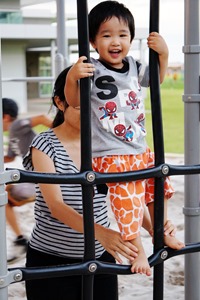 Sometimes I wonder how I’d be able to love another little one as enormously and completely as I already do with Nathan. He’s growing into the cutest, smartest, affectionate and most lovable little chap that I just love him so much to bits.

Some of the adorable and loving things he does…

At the moment I’m probably a big central part of his whole world… his main playmate, caretaker, comforter and companion. But after this I know I will somehow need to manage dividing my time, attention and even lap space. So I agonise quite a bit over what the situation would be life from Nathan’s perspective… would he feel sidelined? Less loved? Less important? Neglected?

I wish I could somehow make him understand everything… to prepare him in some way… to help him see that my love for him will not be any less.

You could say I’m almost grieving a little over the end of this era with Nathan… after all he is sort of being forced to grow up in a way. Without fully comprehending  what is going on, he will be compelled to have to deal with the fact that it will be no longer just about him.

Of course it’s true that he will be losing his only-child status and exclusive relationship and undivided attention from mummy and daddy, but on the other hand he will be gaining a new sibling to love and play with for life.

Well I suppose we are coming to an end of an era.

But it is also the beginning of a new one.