Pregnancy #2… how is it different?

So I know I haven’t been chronicling much about this current pregnancy. Of course the whole novelty of the whole experience is not the same, being the second time round. But I don’t think I have been thinking about it any less, just thinking about it from a different perspective. 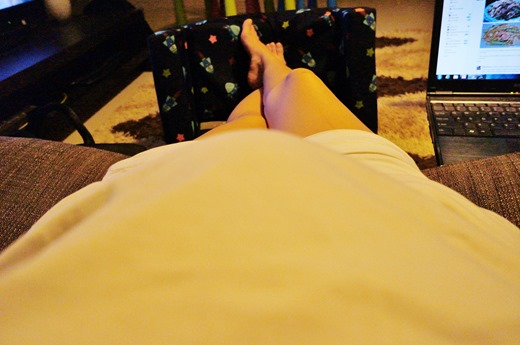 Morning sickness and food aversions
Compared to the first time round, this experience has been dramatically different. I literally felt sick to my stomach almost all day long. My sense of smell seemed to be constantly in hyper-sensitive mode which probably exacerbated the whole all-day-long-morning-sickness feeling. Smells I was sensitive to included musty rooms, chicken, raw onions, raw meat, even rice, and changing nappies was a huge ordeal for me every single time. Thankfully the worst is over and my sense of smell seems to have bounced back to normalcy again.

Food cravings
I don’t have huge list of food cravings, but one thing new I noticed is a strange new craving for fizzy soft drinks, especially Coke. I’ve never been a fan of fizzy drinks before this… but nowadays our fridge has to be constantly stocked with bottles of Coke, Sprite and Schweppes.

Popped belly
This time round, my preggy belly popped out waaaay earlier than last time. Perhaps things are just ‘looser’ and less tight than they used to be. So I was already pulling out the maternity clothes at the fourth month whereas the last time I don’t remember having evident signs of a belly until closer to the sixth month. And if the adage holds true, my maternity clothes should eventually become my permanent wardrobe.

Feeling the load
With my bigger belly, I definitely feel the difference in the pressure of my belly’s weight on my pelvic area. I visited a chiropractor which helped ease the pain a little bit after each session. But even the chiropractor says that the pain can never completely go away as baby keeps growing and my belly keeps expanding. The only thing to do is to take it easy with my movements, take smaller steps and walk at a comfortable pace.

Baby kicks and movements
I revisited this article which I blogged about during pregnancy #1. I somehow get the sense that this baby’s movements seem stronger and more apparent than last time. Maybe it’s due to my being more aware of such movements, but I think it’s more so to do with things being a lot more ‘loose’ than before, so there’s more room to wiggle around. It feels like having a wriggly little snake in my belly moving and wiggling around in there all day long. Quite an apt analogy since this one will born in the year of the snake.

P.S. To answer the big FAQ: Have we found out if it’s a boy or girl? No, we have not found out about the gender yet. During the 21-week scan, baby had its legs legs wrapped tightly around the umbilical cord and refused to move or let go no matter how much the radiologist pushed and prodded, so there was no chance to get a peek. Hopefully we’ll find out at the next scan.