A father who shows his love

Today’s post is a special one for my father’s birthday coming up this week.

How does your father show his love to you?

Compared to mothers, most fathers are generally not seen to be as demonstrative of their love and affection. When we talk about the traditional role of fathers, most people would associate words like ‘Provider’,  ‘Leader’ or ‘Head of the household’.

I now realise how tremendously blessed I am to have a father who decided to break out of the traditional mould of fathers in showing his love to his children.

So when I reflect on my own relationship with my father and how my dad showed his love to me as his daughter, two things immediately come to my mind… 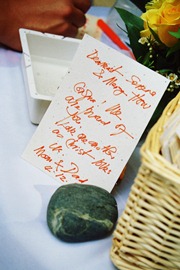 Love letter from dad
My father has a very distinct handwriting – strong and bold, every word written at a firm 30 degree angle. Over the years, his handwriting has become a familiar sight on documents, addresses and birthday cards. But the full preciousness of his handwriting came through during the time when I first came to Perth for university studies.

My dad had flown over to Perth with me to ensure I settled in well in uni. On the last day of his stay, after we said our goodbyes I went back to my room and discovered a sealed envelope with my name written in his familar handwriting. Inside was a letter from him.

In the letter he wrote about how proud he and mum were of me, he asked me to take care of myself and reminded me to call him if I ever needed help, then signed Love, Dad.

It was a simple letter, but I could sense every word carrying his love and prayers. That is why it is so precious. I keep the letter in my box of treasured items because I know no matter what happens in the future, I will always have this letter as a keepsake of my father’s love for me.

Take the time to write your children a letter… sign it, seal it… Your child will quietly realize the letter he or she holds is from a man unlike any other in the world –Dad. Letters from friends may eventually get thrown out, but Dad’s letters get safely put away. And in the future, during those discouraging moments or perhaps on lonely days, those notes come out again and again, bringing the reader an assurance of one certainty –Dad’s love. (Gary Ezzo, Growing Kid's God’s Way]

The biggest hugs
My father is not a big man. Across the general population, his height and built is fairly average. But going by hugs, there’s no denying he is the biggest man I know in the whole wide world.

When my dad hugs someone, he REALLY hugs them. Like really pulls you in, arms wide and fully open, then tightly enveloped around you completely and holds you captive for at least a good moment or longer. Sometimes his hugs are so tight, I have to remind myself to breathe.

My dad’s gigantic hugs are just like him–big hearted and generous with no holds barred. No matter how old I get, I will never get tired of getting his hugs.

There is something very special about Dad’s arms. Mom’s arms are comforting, but Dad’s arms are secure… Our children are never too old to be kissed, hugged or held –ever! Even as a full-grown man, I would give anything to be held one more time by my own dad who passed away… (Gary Ezzo, Growing Kids God’s Way]

Although this post is dedicated first and foremost to my dad, I hope you enjoyed taking a moment to reflect on and be thankful for your own father… and maybe also be grateful for the man in your life (who might also be the father to your own kids).