Should we, and when, and how should we start actively weaning Nathan off thumb sucking?

Yes. My son belongs to the tribe of thumb suckers. 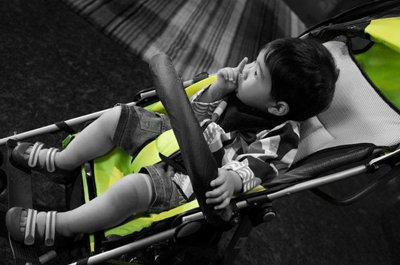 Nathan first discovered his thumb when he was around 3 months old, much to my relief at that time. It was the biggest breakthrough for him in being able to sleep fully through the night and having consistent naps.

I must say that among his peers, he is considered a top champ in terms of sleep. He is able to consistently sleep through 12 hours through the night and over 2 hours at naptime and I think his thumb is a big key in helping him tide over sleep transitions smoothly by himself.

We had tried other options before, like dummies/pacifiers and various loveys/soft toys but none of them ever caught on. He absolutely hated the dummy and spat it out every time (we have a whole stash of different types and designs of dummies now collecting dust in the cupboard).

We accepted the thumb sucking as it was the key for Nathan to learn to self soothe, and it had some advantages over the dummy – e.g. it’s always there, won’t fall off or get lost, and no need for running over every now and then to pop it back in his mouth when it falls off.

I personally don’t mind Nathan’s thumb sucking at all and even find it somewhat endearing. Plus he is not a constant thumb sucker and so far only resorts to it in three situations:

At all other times, he is usually too busy playing and exploring to suck his thumb. He’s still only just 19 months old after all, so I’m not really in a big hurry to shut it down.

But lately I’ve started to wonder if his thumb sucking is becoming an issue… to other people that is. Some people are just completely disgusted, turned-off and even horrified by it. I sometimes worry that for some people who happen to catch Nathan at a vulnerable thumb-sucking moment, they might view my son like this.

So what now? Cold turkey? Gentle weaning? Self weaning? Employ drastic measures? Or bring out some wacky contraptions?

Rhett Butler: Mrs Merriwether, I've always had a great regard for your knowledge. I wonder if you could give me some advice… My Bonnie sucks her thumb. I can't make her stop it.

Mrs Merriwether: Make her stop it. It'll ruin the shape of her mouth.

Rhett Butler: I know, I know. She has such a beautiful mouth, too. I tried putting soap under her nails.

Rhett Butler: Quinine! I never would have thought of it. I can't thank you enough, Mrs Merriwether. You've taken a great load off my mind!

Hmmm… now where can I get hold of some quinine?

P.S. I really like this approach to the thumb sucking issue – great advice not just for thumb sucker situations but other comfort object attachments like dummies or smelly pillows/blankies/teddies etc.