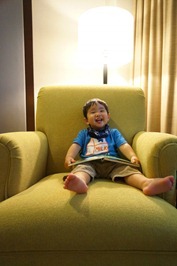 This week as I was jotting down notes for Nathan’s daycare, I decided to include a list of some vocabulary updates for our carer’s reference. After all, it’s been over two weeks since she saw him and there are a number of new words he’s picked up since then.

So I thought to jot them down here too for memory’s sake. Nathan will turning 18 months old in one week. He develops so quickly and learns so much every day that it’s hard to pinpoint exact moments when he learns something new. But here are some fairly new words he’s recently added to his vocab over the past couple of weeks…

Poo-poo = Poo (i.e. #2)
Pappy = Nappy
Wice = Rice
Joop/Toop = Soup
Fok = Fork
Po-po = Chinese term for grandma (my mum was really pleased with this one)
Tock = Clock
Tak = Stuck
Twak = Truck
Tar/Kar = Car
Pok-pok = Poke (referring to the pom-pom poking game I made for him)
Noma = Thomas (as in Thomas the train)
Doys = Toys
Bop = Drop
Doh = Door
Dwoh = Draw
Waiht = Write
Weht = Wait
Waip = Wipe (he will actually grab a cloth and wipe a surface where he spilled something or his nose after he sneezes)
Top = Stop (he will hold up his finger very firmly as he does this – something he picked up at daycare I think, as I don’t do this)
Aiyoh/Aiyah = new expression picked up in Malaysia

And of course he has already been calling us mummy and daddy for a while. But sometimes he will call out “niiiiiiii” to his dad, mimicking my way of calling “honeeeeey” to hubs… the exact same tone and inflection used is uncanny and very comical.

Other long time words he has already been using:

Up = when he wants to be picked-up, carried or taken out from somewhere
Mum-Mum = eat/food
Mik-Mik = Milk
Na-na = Banana
Shoo/Shoos = Shoe/shoes (I always think of Jimmy Choo when he says this)
Haaai = Hi
Baaai = Bye
Bek = Bag
Beht = Bird
Wower = Flower
Bok = Book
Bo-bo = Ball
Dak/Dakee = Duck/Duckie
Teti = Teddy
Dok = Dog
Behbee = Baby
Bah-beh = Bubble
Tick = Stick
Nai-nai = Nite-nite/Good-night
Ais = Ice (he enjoys sucking/munching ice, a rare treat which started one time when I gave it to soothe a cut on his lip)
Pahpee = his term for “peekaboo”
Japechay = his term for “TV” (not sure how this one came about – maybe he was trying to copy us saying “watch TV”)
Uh-oh = an expression that comes out whenever he drops something on the floor

Words I know he understands but he has not spoken (in my hearing at least):

Words he says out loud when reading specific books together:

His pace of learning is so rapid that I can hardly keep up with this list of words. I know there are probably other words I’ve missed out and by the end of the day, he will have added at least one if not several new words to his vocab.

Also, 10 words to avoid around kids