One of the latest dramas happening in our household:

From a kid who was known to love water and baths, it was just baffling. Once he saw one of us going to prepare his bath, he would go into complete meltdown and bawl continuously all the way until we took him out of the bath.

Evidently something must have happened along the way to make him associate this activity with something scary.

So the next day, I gave him a bath right in the middle of the day (instead of near bedtime), filled the tub beforehand and put in his favourite bath time toys in a sort of play-invitation mode and invited him in.

He happily crouched down to play with the toys in the tub from the outside, and after an interval, cautiously stepped into the tub to continued playing and splashing about in there.

The following day, I tried the same method but closer to bed time. 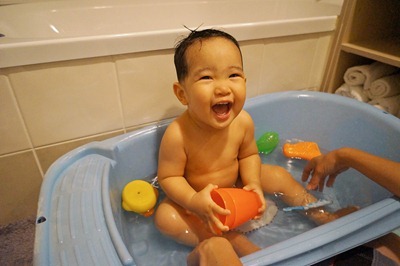 So from now on, it seems our bath time prep method would need to go like…

#2. In the meantime, the other parent slips off to fill the tub and put his toys in

#3. Bring Nathan to the tub and let him play with the toys from outside the tub

#4. Strip off his nappy and let him step into the tub at his own pace

#5. Finally once he’s in the tub, take off his shirt and bath time can begin

Hopefully one day when his vocab improves, he can explain to us what the whole deal was about with the bath time drama.