New foods and countdown to one year

Cheerios! His getting very adept at the thumb-forefinger pincer grip to pick up small objects. So Cheerios are now a favourite snack and a good way to keep him occupied. 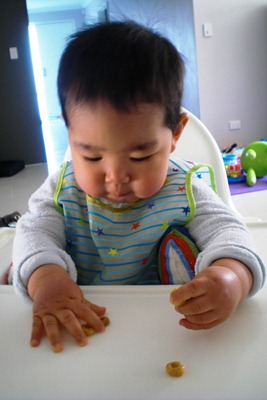 Vege sticks – either steamed or blanched. Here he’s munching on some blanched kai-lan stems (Chinese broccoli) and loving it! 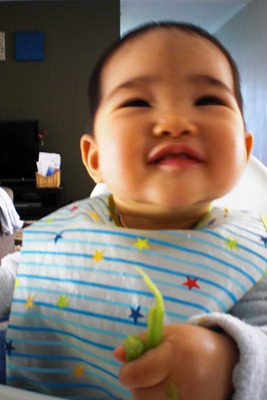 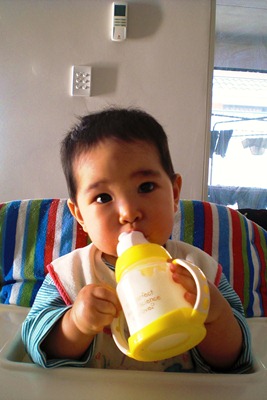 Other than that he’s already been enjoying cruskits, cheese sticks, Arrowroot bickies, apple slices and a variety of other foods.

He’s now also progressed from soft lumpy food textures to eating rice with sauce or soup, mixed with chopped veges and meat. I now can sort of prepare some of our meals together by cooking his portion of the meat/veg first without salt/soy sauce, setting it aside and then continuing on with the remaining batch for hubs and me. He will then eat his portion with rice and sauce/soup, while hubs and I have our version. This is good timing for our upcoming holiday so I don’t need to purposely cook rice porridge or mash up meat/veg especially for him.

I’m still nursing him four times a day. My aim is to make it to at least one year of exclusive breast milk as his main source of milk/fluids. I was worried at one point that he was not getting enough as he seemed always very distracted when nursing. Either that or he’s gulping down my milk in lightning time. But he’s wetting his nappies as usual and is happy, so I guess everything is alright. It’s great that we’re still going strong with this as it’s so much more convenient to travel this way. No need to lug around formula, bottles, sterilisers and all that.

Just two more months till the one-year mark! How scary is that? My baby is growing too fast…