Please give a standing ovation

My mum has been reminding me again and again to lower Nathan’s cot to the lowest setting. She was quite concerned about it because apparently my younger brother as a baby had somehow managed to fall out of his cot. It was especially unexpected because the sides of the cot were really very high for his size at that time so it was really a mystery how he managed to do it.

We certainly did not want anything like that happening with Nathan. So we definitely intended to lower Nathan’s cot as soon as possible but just never got round to it. There was a lower sense of urgency in our case as Nathan hasn’t really been showing clear signs of trying to pull himself up to stand or even pushing himself up to sit on his own (although he’s already an expert commando crawler).

However in the space of just a couple of days, Nathan can now push himself up to sitting position all by himself. This development should already raise some warning bells about doing something with the cot. But before we could do anything, just yesterday he suddenly decided to pull himself up to standing position all on his own. 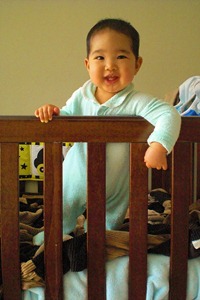 I was so blown away when I saw it… and also pleased that I was right there in the same room to witness him doing it for the first time.

My parents would probably be horrified that I left it till now before lowering the cot. I have mixed feelings about it. If I had lowered the cot way earlier, I might never have had the chance to see him pull this amazing stunt with my own eyes.

I showed hubs the video immediately when he got home that very day. I then placed Nathan in the cot so he could do a live demo for his daddy. It was such a wonderful moment for all of us. Nathan was gurgling with delight obviously realising that he must be doing something really clever to get all this attention.

After the performance, hubs duly adjusted the base of the cot to the lowest setting. I felt a little sad for Nathan that we had to curb his cot standing activity right away after the very first time he managed to do it. But I suppose in time he’ll figure other ways to pull that stunt again.

For other parents: I did some searching to see if there were any guidelines on when is the right time to lower bub’s cot. There doesn’t appear to be any and it seems to vary from baby to baby depending on the situation. You can check out this forum thread to see what are some considerations other parents had when deciding when to lower their baby’s cot.