Jumperoo review is out

For while now I’ve been contemplating getting a activity centre or a doorway jumper for my son who’s now into his 9th month. He’s been getting increasingly active as the days go by with an insane amount of energy to burn.

I considered getting a walker or doorway jumper, but was concerned over safety issues with such items highlighted in Choice magazine’s list of Ten Things Not to Buy Your Kids. Hence stationary activity centres appear to be the safer alternative for what I was after. 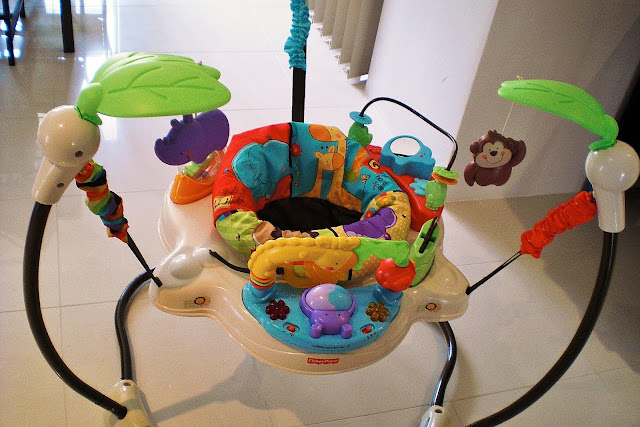 So when Fisher-Price gave me the opportunity to review their Luv U Zoo Jumperoo, I was thrilled. My official review has been published on the Bub Hub Reviews section which you can check out here or read below:

Jumperoo - the perfect hybrid between activity centres and baby jumpers

I was impressed that the Jumperoo was not just a static activity centre, but doubled up as a baby jumper as well, which is a safer option to doorway jumpers. It’s the perfect hybrid solution between activity centres and baby jumpers.

Here’s my assessment of the Jumperoo…

Things that would have been better…

My bub’s assessment of the Jumperoo?

As much as I and my son love it, I wouldn’t leave him in it all the time as I believe it’s still important for babies to get plenty of mat and tummy time as part of their development. If you have an older bub like me, you might find after a while they will want to come out of the Jumperoo to explore other things or crawl around.

Nevertheless I do think the Jumperoo a fantastic product. Albeit it is somewhat on the pricier end of the scale of activity centres, but might be well justified in the fact that it is considered to be the top product of its kind in the market.

If you’re planning to invest in an activity centre, I would say this as a good versatile product that adjusts to your baby’s growth and incorporates the safety features of stationary activity centres with the all the bouncy fun of baby jumpers