This post is a Product Talk by Nuffnang. I received this product in exchange for a review but my opinions are completely genuine and honest.

Last Friday, there was an unexpected ring on the doorbell. I was rather annoyed at first as it sounded right in the middle of Nathan’s morning nap. 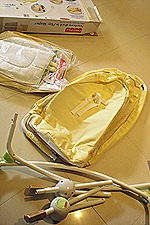 However I was pleasantly surprised with a delivery of big package for me.

The package turned out to be a Fisher-Price Rock N Play set sent by Nuffnang for me to review. I was so excited that my annoyance at Nathan’s interrupted naptime immediately disappeared.

I laid the different components on the floor and contemplated my next step. Should I wait for hubby to come home to assemble it for me (as I normally would)? In the end I decided I couldn’t wait that long and went ahead to try my hand at putting it together.

After just a few clicks and snaps, in 10 minutes I was able to have my “tadaa!” moment.

The first thing that caught my attention about the design of the rocker was the depth and incline of the seat which looked quite different from most rockers I’ve seen in the market.

As Nathan was a little grumpy from being woken up early from his nap by the doorbell, it was an opportune moment to try out the rocker on him. So I popped him in… 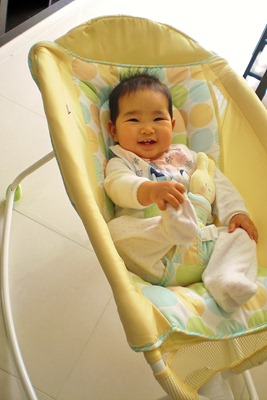 … And after a few minutes he was all smiles again. *phew*

Nathan was too excited to go back to sleep, but he was quite content to sit in the rocker while I continued on with the chores around the house. He evidently found the rocker to be very comfortable. 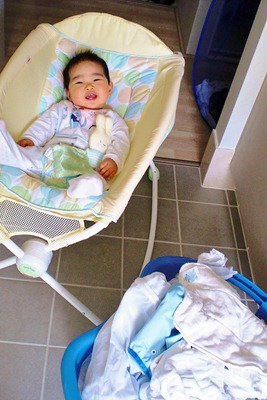 I immediately liked how the deep incline of the seat provided a more secure position for my boy. Nathan actually has a tendency to slide down his rocker and would fuss when the straps started digging into his armpits and crotch. So the upward tilt of the Rock N Play was just genius for me.

Admittedly Nathan is past the sleepy unsettled newborn stage where a rocker was essential to soothe him to sleep. But this would have been so perfect for those times when I was working from home in the study and was not able to rock Nathan to sleep in his room. I also liked the fact that the height of the seat was higher compared to most rockers which was the ideal position for maintaining eye contact with him at desk level.

Things that would have been nice to have in the rocker would be a bar for hanging toys and the option to swap the rocker into a stationary position. But those things are made up by the great ergonomic incline of the seat, the super lightweight and compact design, plus the cute bunny toy that comes with the set was an added bonus.

The only other thing that daunted me a little was the rather steep RRP in Australia which is around the $115-130 mark (however it’s a lot cheaper in the US at around $50 – not sure why there’s such a massive price difference). But I would definitely say the ergonomic design is something that is very unique and especially ideal for babies with colic or reflux issues. In any case, it’s an item worth considering to include in your registry if you’re planning a baby shower.