7 months and 3 weeks. That’s how long since we began our parenting journey and since Nathan came into our lives.

A lot has been going since my last Nathan update. he is thoroughly enjoying his solids, even to the point that I was worried that he was overeating. But I only feed him healthy food anyway like fruit, veges, rice cereal and oatmeal porridge.

At this stage, he’s been eating a cup of rice cereal mixed with either pureed fruit or vege three times a day (breakfast, lunch and dinner). His favourites include apple, pear, pumpkin, sweet potato and carrots.

Just this weekend, I decided to introduce a number of new things to his menu – chicken, yoghurt and rusks.

For the chicken, I boiled some lean chicken breasts and pureed it in the food processor with a little bit of the stock from the pot. I served it with rice and carrots and he just went for it. Looks like he was definitely ready to leave his vegan diet behind.

I opened a tub of infant yoghurt at breakfast on Saturday and let him have a small teaspoon to start with. He showed some comical food faces at the initial sour taste, but opened his mouth eagerly for more. He finished the whole tub easily in one sitting. 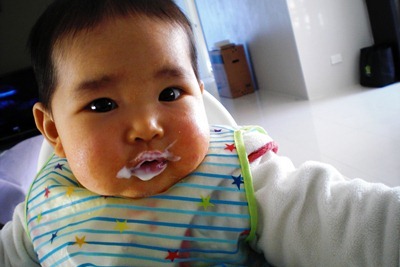 For a mid morning snack, I handed him a rice rusk. He instinctively reached out for it and brought it to his mouth (as he does with pretty much everything these days). He must have been pleasantly surprised at the taste and the texture as he happily gobbled it down.

He’s pretty much been an eating machine. I’m always surprised at the amount of food he’s able to eat for such a little person.

Other than food, a fairly recent major developmental milestone is sitting up by himself unsupported.

I think he really enjoys the view of the world (and his toys) from this position.

By the way, that trick of tilting his head to one side in the above picture on the far right is entirely his own thing. He has a knack of doing it just at the right moment when all eyes are on him to produce huge squeals of admiration from his audience. We have no idea how or where he picked up that little trick.

His 8-month check up with the child health nurse is coming soon so I should have some vital statistics to share then.