Breaking in those little teeth

As you know, Nathan absolutely loves his food. His appetite has been going strong and steady and he’s easily able to down almost a whole cup of rice cereal + pureed fruit/veg.

I’m gradually increasing the level of “chunkiness” of the texture of his solids. So I don’t puree everything to a fine paste as I used to but leave a few soft bits here and there.

Anyway one time while I was eating some apple slices, I decided to let Nathan have a taste of it. I held an apple slice close to him, and he leaned forward to bring his mouth to it. After a few funny food-face moments, he got over his initial surprise and seemed keen for more. However I only sort of let him mouth and taste the apple slice as I didn’t want him to accidently bite off a piece and choke on it.

So a few days later, while I was thinking what to do with a couple of overripe pears, I decided to peel and slice them for Nathan to try. 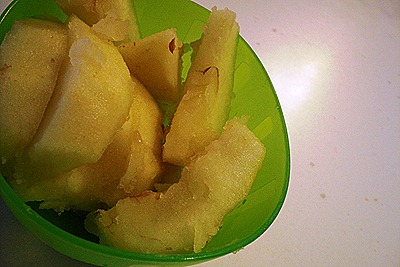 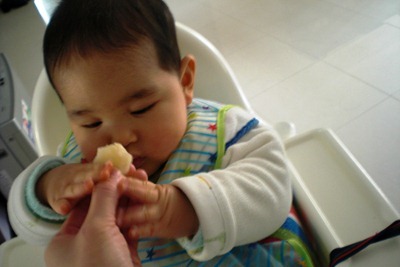 … And he just loves it. His upper front teeth are starting to peek through so it’s good timing to start breaking them in on something with a bit more ‘bite’. 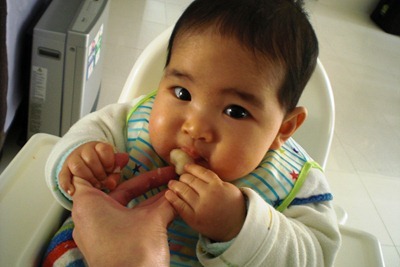 I found the mushy texture of overripe pears to be perfect for letting him experiment with biting and chewing without any risk of choking on any solid bits as the pieces just crumble and squish when pressed against the roof of his mouth.

I feel like such a genius for thinking of this. Granted, the concept may not completely new, but I definitely recommend overripe pears as a good starting point for letting baby try out their chomping skills.