After all that gearing up for the solids plunge, Nathan’s first dipstick test into the wonderful new world of solids was actually somewhat anticlimactic. I was bracing myself for an onslaught of protests, spitting, messes, food faces and other such antics.

But once he took that first mouthful of rice cereal… 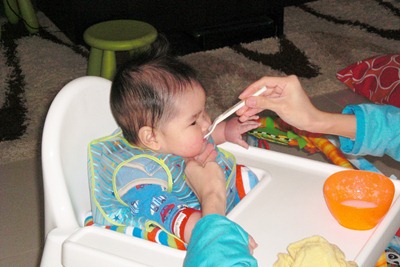 I think he was hooked!

He seemed to be clamouring for more... Toward the end of that first feeding session, he even appeared to want to feed himself (perhaps being already familiar with his friend, the spoon)

“Lemme have the spoon mummy, I know how this works” 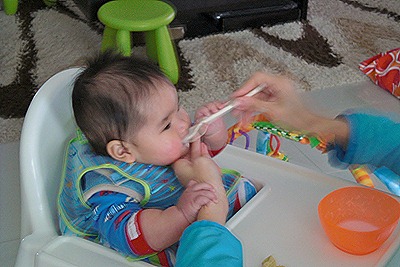 I actually took a cautious approach and only prepared small amount for breakfast to try out after the usual morning nursing session – about a tablespoon of rice cooked in a quarter cup of water (with half ounce of breast milk mixed in). I fed him just half of that portion. I wanted to be sure he didn’t have any bad reactions or tummy upsets following his first taste of solids.

I skipped a round of solids at lunch just to continue to keep a look out for any unpleasant effects. He seemed to be perfectly alright and happily played and napped as usual. So at dinner time I decided to try a tiny portion of something else…

I scooped out about a tablespoonful, mashed it up and mixed in about half an ounce of breastmilk.

I think the taste of this one surprised him a bit more than the rice. But after a few initial ‘food face’ moments, he got straight into it. He was even instinctively opening his mouth each time the spoon approached his lips. 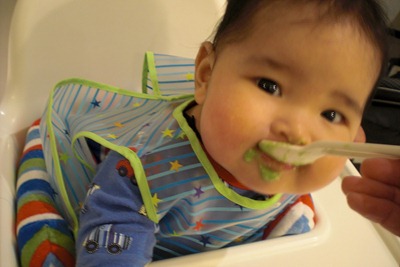 Wow! Two rounds of solids in one day! I hope it wasn’t too much for his first day. 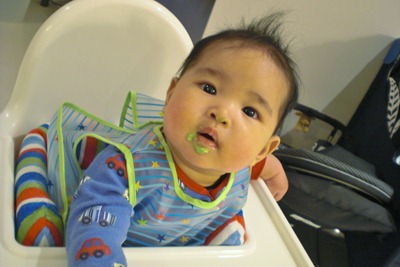 So there you go, Nathan… your first foray into solids – a whole wide world of new tastes and flavours out there await you.

Since the dipstick test went pretty well, I went on to prepare a few more portions of solids to freeze ahead of time. I didn’t go crazy and prepare truckloads of food – just one ice-cube tray of pureed vegetables, half of mashed sweet potato, half of pureed carrots. 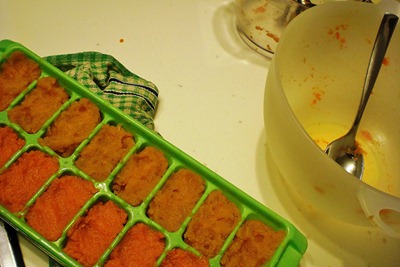 I figured other foods can be prepared on the spot, like the rice cereal, and fruits like avocado and banana. So I think we’re set for now.

(P.S. I’m still keeping a look out for any possible nasty surprises at nappy change time. So far we’re all in the clear)