I haven’t posted an update in a while, but a lot has been happening. 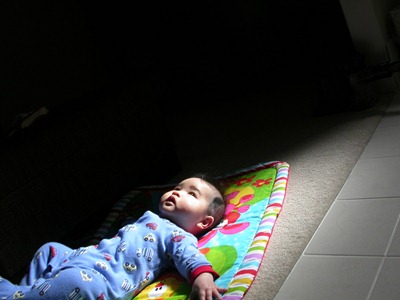 For one, he’s grown bigger. We haven’t weighed him just yet, but some of his clothes are definitely getting to be a tight fit already.

His big sparkling eyes, chubby rosy cheeks and easy-going demeanour are a great delight to everyone who see him. In church it now takes me double the usual time to walk across a room because we need to stop every few moments for the benefit of his admirers ^_^

Some new developments on his part include:

1. Laughing when tickled – he lets out the most delightful chuckly gurgle, which makes great fun for playing games like ‘round and round the garden’ and ‘this little piggy’… he also giggles at all sorts of random stuff, like yesterday, he somehow found it super funny getting his face wiped with a warm wash cloth during bath time 2. Playing with his hands – yes, it’s now very evident that he knows where his hands are and can amuse himself with twiddling his fingers, mouthing them and sucking them contentedly

3. Grabbing toys – he’s now shown definitely interest in his toys – no more random swatting, he makes a decided grab at them now; one of his favourite toys is the little taggie I made him… but he pretty much likes playing with any toy he sees in front of him 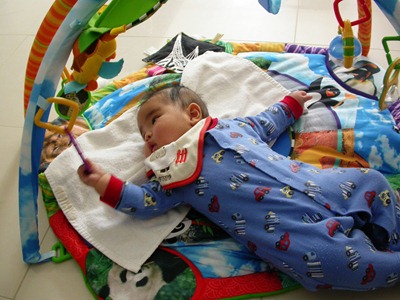 4. Turning over – he’s already fairly adept at the turning over from his tummy to his back. Just today he managed to turn from his back to his tummy all by himself for the first time, completely unassisted. 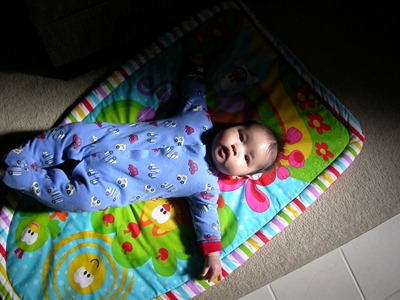 His daytime routines are going pretty well. Wake times are getting longer, so I try to mix things up a lot more with the activities I do during those times… usually he can spend some time playing happily by himself in his play pen or tummy time mat, besides that he just accompanies me around in his rocker watching me do various things – hanging up laundry, cooking, eating, washing dishes, sewing…

He can stay up for at least 1.5 hours and sometimes close to 2 hours before he starts showing signs of restlessness. After a nappy change and brief cuddle, he usually goes down for his nap smoothly and will sleep for 1-2 hours.

After some experience with navigating the well regarded babywise system, I’m no longer fussed that he doesn’t always have nicely timed 2.5 hour long naps (that’s what the book says!). However not having a fixed length naptime definitely has its inconvenient moments, especially with working from home. I recently sprained my toe when rushing to pick him up in the midst of a client call – big ouchie!

Our main present challenge is the bedtime routine. After his bath, change into pyjamas and feed, he sometimes takes a long time to settle down and will want to keep nursing some more. On a good night, after one feed he will settle in after a few whimpers… but on most nights, he will fuss and want to nurse 1 or 2 more times before finally settling in.

But once he’s down, he sleeps through pretty well. He will wake up at least once either at around 10.00pm for a feed, or he’ll sleep through till about 5.00am. I reasoned that technically he can sleep 9-10 hours, but somehow it isn’t fixed whether he’ll sleep straight through the first half of the night or the second half after a late night feed.

I used to try to dreamfeed him at a fixed time around 10pm or 11pm, but I found it didn’t make a difference with helping him sleep through the second half of the night consistently. So now I just go with the flow, and if he does wake up at 5am, I only give him half the usual amount and put him back to sleep.

Despite all that, he’s still very much a lovely baby – easygoing, full of smiles and such a joy to have… yes, even in the midst of a sprained toe, bedtime cluster feedings and 5am wake-up calls.