I’m two days late with this post. I had started this post in my mind on the eve of Mothers’ Day, then tried to sit down in front of the computer on Sunday afternoon to piece it together… but things being as they are, you mums out there will have to settle for a belated Mothers’ Day post… *sheepish grin*

On Sunday our church had its customary celebrations with the kids’ presentation, presents and prayers for all the mums. When our pastor called for all the mothers in the house to stand, I gingerly stood up. It was the first time I did so and it felt rather awkward. I was so new and just barely into this whole thing… dare I really join the ranks of all these other women standing up around me?

Each woman who stood up received a rose and a little gift – the ladybug actually unfolds into an envirobag to use for shopping in place of plastic bags. Very cute and handy! 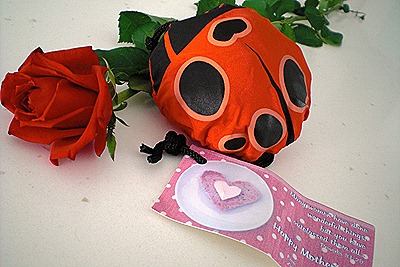 I also received a few greetings and messages from friends and loved ones wishing me happy mother’s day… most of them tacked on with a remark on how special it was being my first Mothers’ Day. It was my friend Irene who reminded me that I was actually already a mother to a child I could not keep.

The bitterness of that experience has since faded in the rosy glow of my new-motherhood, but the memory remains. As I reflect back on that journey, I decided to direct my Mothers’ Day post this year especially to the mothers with empty arms. Not only those mothers who have lost, but more so to those who are unable to hold theirs in their own arms just yet. Theirs is a pain which is elusive and seemingly intangible.

When I was pregnant with Nathan, I often whispered to him how much he was loved and longed for, even before he was conceived. When he was only an ‘intangible’ idea in my mind, he was in a sense already ‘real’ in my heart. That is why I think there is a place, even if it’s a small corner, on Mothers’ Day for the ones with empty arms. They are already loving their child in heart even if they can’t do so with their hands and arms just yet.

This video is a little long (about 4 minutes plus) but I think it helps to take a page out of their book and just for a moment feel a little bit of what they might be going through.

Hope that wasn’t too depressing. I shall end on a more uplifting note by directing your thoughts now to this song, the lyrics of which I find very inspiring…

If you’re a prosy person and all that just whizzed past your head, here is a black and white explanation from the song writer, Rob Thomas, about what he intended to say in those lyrics…