Nathan is 15 weeks and 2 days today. I haven’t posted an update on his progress in a while, so it’s about time. He also just had his 2-3 month child health nurse appointment today, so I suppose there’s no better timing than now to do one.

So Nathan, hand over your ‘report card’ to mummy and we’ll get started. 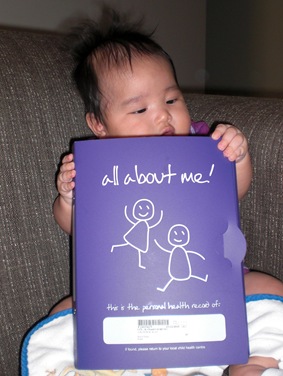 Some notes from his purple book on his growth charting:

He now weighs about 6.5kg which is right on the average mark – I was so relieved to hear this as I was worried that I was overfeeding him and making him fat)

He measures 63cm long which is slightly above average – his father will be pleased about this because he is keen for Nathan to grow up to be really tall.

Other important developmental checkboxes ticked off:

He can brace himself sitting up, with some support under his armpits or from behind his back

He’s also been gurgling, chuckling and laughing a lot more… finding it much easier to get those gorgeous giggles out of him as illustrated below:

All I did was to sing a few lines from Cole Porter’s True Love (still very much one of his favourite songs) and that was enough to get him going.

Other things that tickle his funny bone include:

1. Doing the actions for the song ‘Little By Little/He’s Changing Me’ – especially the part where we go “…Jesus is CHAAAAAANGING me” (emphasis on the part in caps)

2. Bouncing on mummy or daddy’s knee while singing silly songs

3. Mummy going “wheeeeee” while swinging him up and down

4. Daddy making funny faces at him, especially while he’s drinking from his bottle (more on this in my next post)

Nathan is clearly growing into a real pretty boy. At his appointment, the nurse kept exclaiming what a looker he was. She also remarked there was something about his features which could make some people easily mistake him for a girl. She's not the only person who's said something along these lines. I know some people have to put a pink ribbon or flower on their baby to make it clear it's a girl, in my case what can I put on Nathan to mark him as a boy?