What is it about babies and naps? Sometimes babies seem to react to naptime like it’s poison. After milk time, play time and cuddle time… naptime seems to be something they just HAVE to resist. Out come the tears, wails and yells seemingly saying “I won’t go to bed, I won’t, I WON’T!!!” 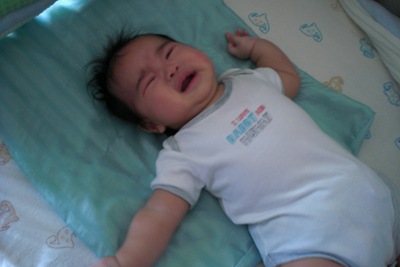 Some of you may remember my magic sling. Well, it’s still magic… sort of… although in actual fact I had learnt that the magic weapon was actually ME. The sling is just useful in that I don’t have to be tied down holding him all the time and can move around the house freely.

I remember I was worried at one point that the sling was becoming a sleep prop, but my dear friend Irene wisely told me that the sleep prop is actually the person wearing the sling. Slings and swings and rockers may come and go, but the thing babies want most in the world is their mummy (or daddy).

Anyway, I was careful to guard against the sling becoming a real sleep prop by always trying my best to put Nathan down drowsy but still awake. That system worked like a charm back then.

However, since that tough week when things were bit crazy, naptime turned into a REAL challenge when Nathan became unable to nap without being sleep-propped completely to sleep… be it in the sling, or in mummy’s arms, or daddy’s arms, with lots of walking, rocking and swaying. Things got out of hand when the process could sometimes take up to an hour. Then by the time we got him down, he would be up again 20-30 minutes later.

All this was wearing me completely down. So we decided to take drastic steps. Although I’m not a fan of the cry-it-out method, I had to adopt some mild form of it in trying to get Nathan out of the need of being held/rocked/walked/swayed to sleep. Generally I don’t mind doing those things to help him go to sleep, but it got so bad at one point that he could only STAY asleep while being held/rocked/walked. I did not want to apply any extreme form of that method, so I didn’t just leave Nathan to just cry cold turkey, but this is what I did…

Step 1: hold/rock/walk him a bit, then put him down, he will of course cry

Step 2: wait a few minutes – I usually wait beside the cot to make sure he’s ok (like not crying himself sick) and sometimes I leave the room for a bit just to make sure I don’t cry myself sick

Step 3: if he’s still crying, pick him up and hold/pat/rock/walk until he calms down a bit and put him down again

(if you are familiar with the original cry-it-out method, you can see that my version of it is fairly soft-hearted – the actual cry-it-out states that parents should not pick baby up or preferably not even touch baby, but leave the room for 5/10/15 minute intervals, then return and just reassure the baby verbally, before leaving the room again for the next interval. This method was just too military for me)

Anyway I just repeat the steps again and again until he eventually falls asleep. 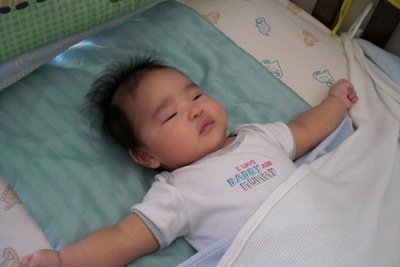 I felt it was rather hard on the little guy, but I really needed things to get back on track. It was really rough going for a couple of days, but this past week saw a really huge improvement. He is now able to drift off to sleep on his own in his cot with no crying (except sometimes a little whimper now and then).

Whether or not it was due the process we went through or just the fact that he had finally come through the wonder week phase or whether we hit the so called magical moment when things apparently ‘click’ into place around the 3-month mark – I don’t know. I probably never will as things keep changing all the time that it’s hard to pin point whether it’s me or him or the method. I can only be thankful that we made it through this challenge and just enjoy this good run I’m having with Nathan for now.