The battle of the bottle

April 12, 2011
In my last post, I mentioned hubs’ talent with funny faces. I’m afraid it’s what we’ve had to resort to during those bottle feeding battles. I mentioned in my previous Mummy the Cow post that Nathan very much struggled with taking milk from the bottle… ANY bottle it seems, as we’ve tried several kinds.

I had mentioned to some friends that I got him to drink from the bottle a couple of times along the way around the 2-month period which went pretty smoothly. But suddenly at around 3 months, he seemed to just decide that he didn’t like it. I started to blame myself saying I should have used the bottle more regularly with him. But the child health nurse said it probably would have made little difference – sometimes babies just decide at some point they don’t like something even if they were okay with it all along before.

Part of me felt pleased to know that little Nate was so loyal to me as his source of food and comfort. But the urgency to get him used to the bottle became more pressing as I was soon returning to work part-time on a flexi-hour basis and needed to pop into the office for meetings a couple of hours a week. So began the parent versus baby battle of bottle.

We tried all sorts of tricks, holding him in nursing position (he hated that), sitting in his rocker, sitting in our lap… but all the time he just kept fighting the bottle – turning his head away, pushing the nipple out with his tongue, and just wailing at the top of his lungs, letting the milk just dribble everywhere. We would then do all we can to soothe him – hubby was especially good at the funny faces that would immediately turn the wails into smiles… but then when he tries to smile or laugh, the milk would just dribble down the side of his mouth even more. We wasted a lot of milk during these sessions… I felt so sayang watching my liquid gold which I worked hard to pump out spilling everywhere.

I almost felt like giving up. But hubs was a real champion with his ‘never say die’ attitude. This was one battle baby was NOT going to win. Finally after numerous sessions we made some progress forward. Either Nathan got the hang of it or we hit the right technique or both together… we succeeded in getting some milk into his little tummy via the bottle although it took ages to get down barely an ounce. 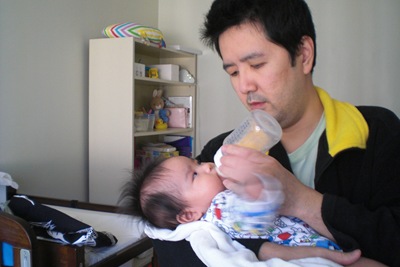 But today was a tremendous success, although the milk always has to be the PRECISE correct temperature and the little prince must be held in a particular position… in the end, SUCCESS!

Battle of the Bottle: winner – PARENTS!