We’re midway through week 11. Nathan is growing rapidly… I can really feel him getting heavier as the days go by. He now weighs around 6.2kg – this is based on our primitive weighing method of stepping on the scales with baby, then stepping on again without baby, and then calculating the difference.

Nathan’s smiles and laughs just keep getting more and more charming. Things that make him smile and chuckle include:

1. Waking up fresh and happy after a good nap to mummy’s beautiful face looking down at him ^_^

3. Daddy playing bouncy-bouncy with him

4. Practicing standing on his legs like a big boy (still with plenty of support and balance in the background from mum or dad)

The big highlight this week was rolling over from tummy to back. On Monday morning tummy time, Nathan was just flopping around as usual and for a moment everything just clicked into place and in that split second I watched him flip onto his back all by himself. I was ecstatic and smothering Nathan with kisses exclaiming “Did you know what you just did? Did you know what you just did?”. Unfortunately I didn’t snap a photo of the moment, but here is a post-flip shot of the jubilant back flipper… 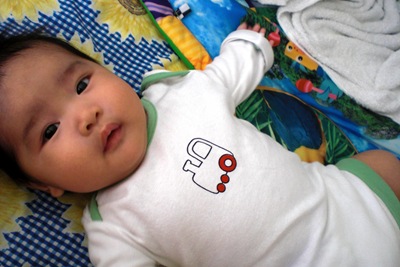 I think he was a bit pooped from all the exertion, and probably also a little puzzled at mummy’s excitement. I think the whole episode was sort of an accident for him and he was just like “eeeerrrr… soooo… what just happened?”. He hasn’t repeated the back flipping again since then, but it does show some physical development of what he is capable of.

Nathan also caught a little cold. Sigh… so young already got sick. I bought one of those bulb syringes to suck out the phlegm from his nose. He goes berserk each time I use it on him. Sometimes it takes two grown adults (namely dad and mum) to conduct a phlegm sucking session. Apart from a bit of runny nose and an occasional cough, he’s been a pretty happy baby.

His wake times are getting longer to close to 1½ hours, including feeding. After waking up, he’ll nurse for about 20-30 minutes, then I’ll let him wiggle and stare happily at his toys in his baby gym, followed by some tummy time, and then some cuddles, singing and talking with mummy. 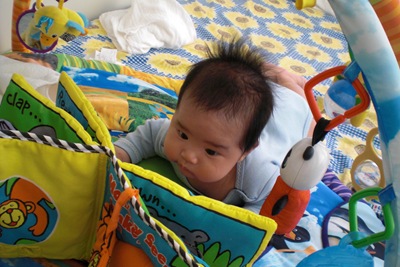 Another big thing is that he managed to sleep through the night, skipping his 3.00am feed two nights in a row! I thought we were on a winning streak but then on the third night he woke up again at 3.00am. Oh well, we’ll get there eventually.

I’m contemplating stretching out his day cycles to closer to 3½ - 4 hours. The reason is because I always seem to have to wake him for almost all his day feeds. Sometimes I wait until after 3 hours since his last feed and still have to wake him up. But part of me wonders if I’m jumping the gun there as we’re still not yet home free on the sleeping through the night milestone. Should I wait or should I move forward with the stretch?