I think every mummy has a secret weapon in her list of baby items. 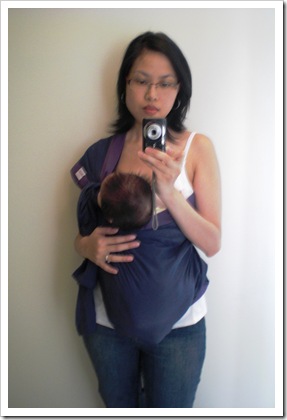 Anytime Nathan is tired or fussy or just doesn’t know what to do with himself, this almost always the sure thing that will calm him down. Over time he fusses a lot less (he didn’t really fuss much to begin with anyway) and the only time I generally use this is toward the end of his wake time – I’ll put him in the sling so I can move around to do other stuff around the house while he quietly watches me from inside the sling. I always put him down while his eyes are still open, then he’ll go on to soothe himself to sleep – minimal or no crying involved!

There are many articles which advocate the numerous benefits of babywearing – one article by Dr Sears even says that “the womb lasts eighteen months: nine months inside the mother, nine months outside”. I’m not sure if I buy into that concept completely, but I definitely love the closeness and cuddliness I get from carrying Nathan in the sling. I’m also certain Nathan’s face lights up the moment he sees me putting on the sling and getting ready to slip him inside.

I use a ring sling but there are so many other different types of baby slings and carriers and slings out there. I considered getting a wrap sling like the Moby wrap which is one of the most versatile carriers in the market. In the end I decided on the ring sling as I preferred the trimmer style without compromising too much on versatility.

I admit it’s somewhat a little bit of a sleep prop. I try to not always use it and usually will put him down in his crib first to see if he can fall asleep on his own… sometimes he does, but more often he just wants the extra cuddle time before settling down for hap. My very wise friend, Irene, assured me that the sleep prop is not the sling itself, but me!

My only concern is over articles and people cautioning me against sleep props and spoiling the baby, but actually I really don’t mind ‘slinging’ him around for those few minutes. It’s really another one of those baby things which I only get to enjoy at this season when he’s still tiny and cuddly – soon it will pass. Already I’m choking up a little when I remember those early weeks of intimate midnight cluster feedings when he was so tiny and vulnerable, desperately sucking my milk with all his might for survival… his teeny tiny hands pawing at my breasts, holding him close to mould right into the curve of my body, the smell of his skin and hair nuzzled against me… aaaah… I better stop before I really tear up.