How I use traditional muslin cloths as nappies

March 26, 2011
This post is for the benefit of my friend Stephanie who has recently made the decision to take the plunge into cloth diapering. She bought a few pieces of MCNs and is expecting a package of two dozen muslin flats.
Although I've collected a good stash of modern cloth diapers, muslin flats still form a key part of my cloth diapering system.
When I first started using this, I was a little dubious about the absorption power of this seemingly flimsy material. But it’s quite surprising how well it performs… and for such a small cost (sometimes free as these are commonly received as a gift from loving friends/relatives) it’s by far the most economical way to diaper a baby.
The first fold I used was the traditional Chinese or Origami fold: 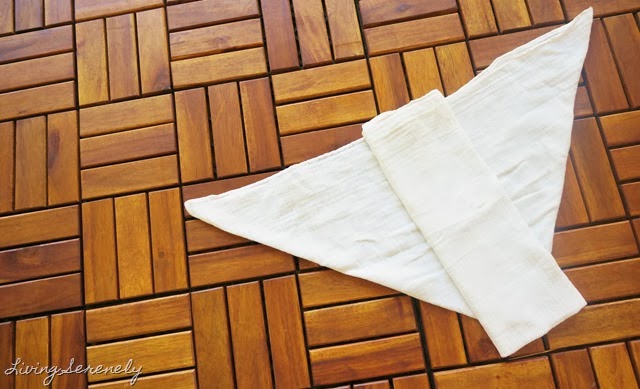 Unfortunately for me, I found that it didn’t hold up very well as my son is a rather heavy wetter and I had yet to discover the use of nappy covers. My other complaint about this fold is that the fold is not really concentrated around the main wetting area. There’s also a lot of excess fabric sticking out after pinning it around a small baby which I thought was quite a waste of potential absorbing function.

After I got my prefolds and modern cloth nappies, I didn’t want my stash of muslins to go completely to waste, so I decided to do some research for other ways of folding them for better absorbency.
Here are a couple of sites I found really useful:

This was the folding method I found most effective for providing plenty of layers for pee absorbency and ability to contain newborn baby explosive poo… it’s called the ‘Jo fold’ – don’t ask me why.

In the last image, you just need to fan out the back of the nappy to form the area for where baby’s bum will go.

Then in goes baby, fold up the middle section, bring the sides around to the front, secure with snappi, add a cover and baby is ready to go!

When the explosive poo started to settle down, I decided to use a simpler method to just fold it and tuck it into the nappy cover (mainly to keep things nice and easy for hubby).

This is something I improvised on my own: 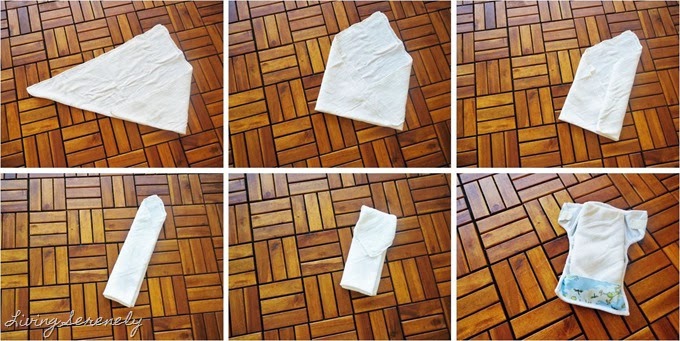 My friend had some questions about whether the muslins would have enough absorbency and would be prone to leaks (which is why she bought the MCNs in case the muslins failed). From my experience they worked fine as long as you keep a few things in mind:
For further information, you can also check out my Bub Hub blog post on Cloth Nappies 101: Flat Nappies as well as it’s cousin The Prefold.