This post is mainly for the benefit of my parents. We try to skype about once a week during the weekend so they can have a glimpse of their beautiful grandson.

Unfortunately this weekend’s session was shot due to a poor internet connection and awkward timing. They called around 4.30pm which previously was when he would be awake for his late afternoon feed and wake time. However as his routine has been evolving, he was asleep at that time and would only be waking up in a hour’s time. At around 6.00pm we tried skyping again but ran into the connection issues instead.

So I thought to give them (and anyone else interested) a view into what his current routine is like. I guess this could also be sort of a between week 11 and 12 update.

We previously followed a 3-hour routine, but I’ve started to stretch it to 3.5 hours as I notice that I’ve had to wake him up for his feeds most of the time lately… here’s what we are currently roughly working around:

11.00pm: dream feed (i.e. late night feed just to help him last a bit longer for the rest of the night)

Please don't call him a robot baby... it's not an exact schedule but is just a rough routine which really helps us to plan our day around him better. As it’s not exact, there are a lot of variations to the routine – the timings can vary by plus/minus half an hour or so. Sometimes he wakes up a bit earlier, sometimes he wants to stay awake longer, sometimes I let him sleep a little bit longer if I feel he needs it.

During his wake/play times, I let him wiggle around and look at his toys in his baby gym for 10-15 mins or so. Then I let him have some tummy time followed by play time with mummy. I will talk and sing to him, hold him up so he can pretend he's a big boy standing on his legs (he absolutely LOVES this). After this I start winding him down for his nap... usually holding him in my arms or I putting him in the sling so I can move about while he winds down.

He's gradually improving with the stretch between 11pm until the next morning. There were a few setbacks here and there where he woke up in the middle of the night and needed a feed, but we're getting there one night at a time.

Since this week’s skype session didn’t work out too well with my parents, here is a little something to give them a boost for the coming week. 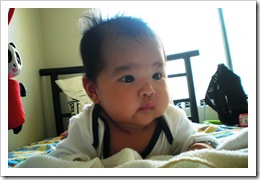 I promise to post up more photos of the beloved grandson over the next few days.