I used to think I had to do a lot of pre-washing, scrubbing and soaking with the nappies. My initial idea was that I had to keep a bucket of soapy water nearby to chuck the dirty nappies in to soak until laundry day. Sounds so mafan right? My thoughts exactly. Imagine my surprise when I learnt that you don’t have to do this. In fact it’s recommended that you don’t.

They call it the dry pail method. Basically after removing a soiled nappy. It’s as simple as chucking it into a dry pail. Hence the name. 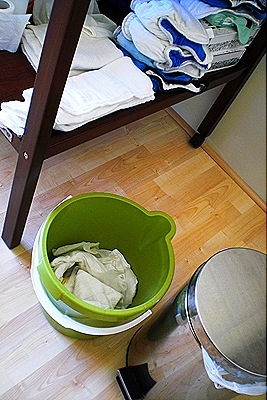 Apparently soaking actually wears down the elastic on the modern cloth nappies and possibly sets in some stains more – which makes sense really now that I think of it. And why would I want a bucket of smelly gooey water, filled with slimy pieces of cloth sitting around my house? Pretty disgusting actually if you think about it. It’s also a possible drowning hazard if you have other kids or toddlers in the house.

So the dry pail is my method of choice. I also put a cover over the pail just for hygiene purposes.

Next question: What about the poo? I was just coming to that. For newborn babies, especially breastfed ones, their poo will still be very watery and runny, so actually you can just chuck it straight into the pail. For older babies who have started solids, their excrement just needs to be tipped into the toilet. You can get flushable nappy liners for this if you’re icky about touching anything poo-related directly.

Come laundry day, all it takes is to empty the contents of the pail into the washing machine, add laundry detergent and hit the button. And get this, you only need to use half or even a quarter of the usual amount of detergent. Apparently all those extra cleaning agents and enzymes do more damage than good to clothes actually and might be rather harsh on babies' skin. In fact they sell special laundry detergent specially formulated for this sort of thing. Basically you want something that’s as natural and additive-free as possible – an article I read recommends ‘green’ detergents like Earth Choice. Better for the environment too. 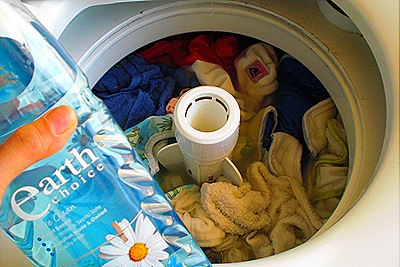 On to the next question: What about the stains?

I think many people underestimate how wonderful this household appliance is: the washing machine. We just chuck in the clothes, hit the button and walk away. Sometimes we even question the effectiveness of the process and try to 'improve' things by using better detergent or more of it, or adding all sorts of other products like Oxyclean, Napisan, bleach etc. I realise now that all that other stuff was really undermining the wonder of this machine.

For those people who have nothing better to do (like me) you can meticulously bring the soiled nappy after each change to the sink to brush/scrub/wash out the stains. All unnecessary really. The washing machine alone is usually sufficient. I just do it to make myself feel better.

For really soiled nappies, there will be some stains. But allow me to reveal my other secret weapon: The Sun.

Sun actually has powerful bleaching and bacteria-removing powers. I never realised how powerful it was until now when I saw the effects with my own eyes. Allow me to illustrate:

Before: can you see a brown patch in the middle of the prefold? 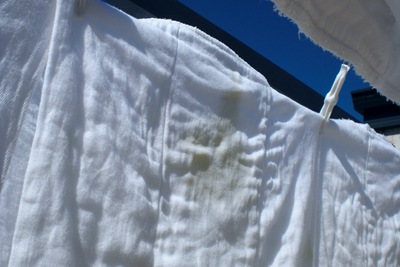 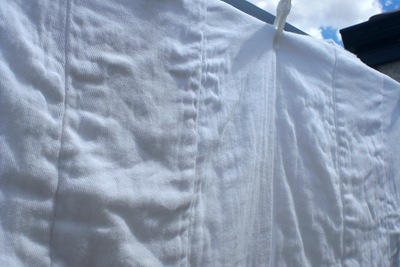 It’s amazing I tell you. That alone is enough to make laundry day a lot more exciting. 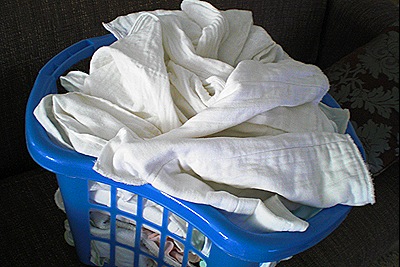 As you can see, most of the cloth diapers used are the prefolds and muslins. I like them because they are easier to dry and because I’d like to prolong the life of my modern cloth diapers as much as possible. 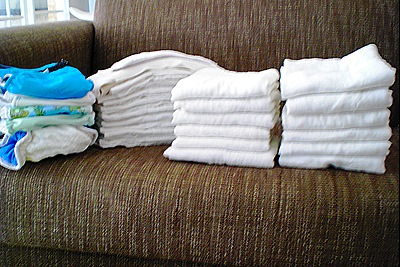 During winter there will be undoubtedly less sunny days for sun bleaching power. But here is a very wise saying I read on another cloth diapering mum’s blog: “clean is not a colour”. I intend to make that my mantra come winter laundry days.