Cloth Nappies Part 1: The story behind

After my last post on my foray into cloth diapering, I got few interested and curious comments. So I thought to expand a little bit more on what I’ve discovered about cloth diapering and how I’ve started applying it.

Also, I need to get hubby in on the game as well… he’s observed me doing a couple of nappy changes, but has not done a hands-on one himself. He’s currently away on a company trip and said he’ll learn how to do it when he gets back. There’s quite a bit of knowledge and info to transfer, so since I know he reads my blog, what better way than to start the process with a bit of Intro to Cloth Diapering 101! (hehehe…)

First of, how did I get into all this? Most of us are familiar with the muslin kain lampin type of nappies our parents used on us. They would fold it into the classic origami style and fasten it on us with a safety pin. 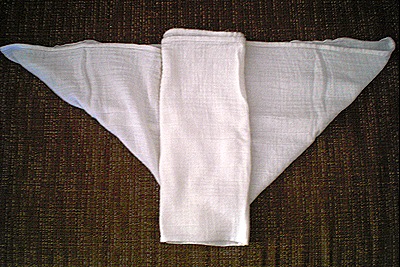 I had about of dozen of these in my stash which I had intended to use just as wraps and burp cloths and hadn’t thought of using them as nappies to begin with.

However when Nathan was just about a week old, he started to get rashes on his perfect satiny soft bum. I think the moisture trapped inside the disposable nappies was the main culprit. I was horrified to see it. I lathered lots of sudocream and meticulously dried his bum thoroughly at each nappy change but the rash still persisted for days. That was when my mum suggested wrapping him in muslin so he could get better air circulation and said she never used to have this problem with us when we were babies using the traditional muslin cloths. She showed me how to fold it in the origami style and we fastened it with an old brooch pin (obviously I was not at all geared up or prepared for cloth diapering). I think we had the right idea in mind, but due to the lack of adequate accessories it was short-lived as we experienced leaking with poor fastening of the brooch and lack of a waterproof cover.

Eventually his rash got better, but I was still concerned about him getting another rash. So I started reading up some articles on how to prevent and treat nappy rash. I found many tips and solutions, but one article mentioned that the use of cloth nappies is overall better for baby’s bum health and prevention of nappy rash.

Then a friend from church, Cindy, passed me three unused modern cloth nappies which she got from her sister-in-law and mutual friend, Rebecca. 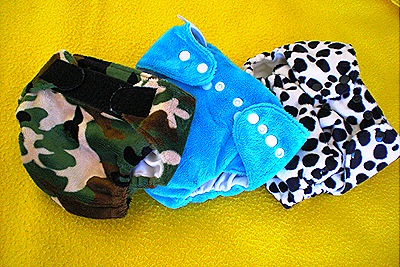 The colours and designs were soooo adorable I decided to try them on Nathan. Unfortunately I ended up with leaks and poopy blowouts immediately. So once again I turned to the internet for answers… one link led me to another and soon I was lapping up heaps of articles on cloth diapering. Rebecca also had a lot of helpful advice and tips on cloth diapering on her website.

Slightly better informed, I learnt that sometimes breastfed newborn babies are better off in muslin or prefolds which can be folded more securely around their legs to contain their explosive poo (if you don’t know yet, breastfed newborn babies’ poo is ejected very explosively for some strange reason). With the aid of instructional videos on youtube, I learnt how to fold the muslin kain lampins to provide better pee absorbency and containment of poo. I also removed the inserts from the modern cloth nappies I received to use as waterproof covers (so the pee doesn’t soak through and wet the bedding).

It was a shaky beginning, but I got more and more confident and started thinking more seriously about the cost savings from using cloth nappies over disposables… and why not throw in saving the environment too! (which is very very true).

I did some more research on the different types of cloth nappies and the costs etc. Cloth nappies require a bit more upfront investment in order to build up a meaningful supply to work with. I was still convinced that they provide better cost savings in the long term (no need to buy so many disposables for the next 2 years). But I think the amount of upfront investment might be quite a bit for hubs to swallow.

And then I found the answer… Gumtree! With a few basic keywords typed into the search box, I was presented with heaps of options for pre-loved cloth nappies. After a few enquiries and back and forth emails, I managed to find an unbelievable bargain for a whole set of various types of cloth nappies.

Since then, I’ve been using cloth nappies 99% of the time. Night times are still a bit tricky so I’ve resorted to using disposables until I can stabilise his sleeping through the night pattern, as well as find a solution to provide good absorbency to last the whole night.

For Part 2, I’ll run through the different types and methods of cloth nappies I have and use.