Hubby did his first hands on cloth nappy change last week! I had a mini workshop session to run him through our cloth nappy stash and show him how to use them. He was a little overwhelmed at first at the variety of cloth nappies but in the end he was fully supportive and on board the system. 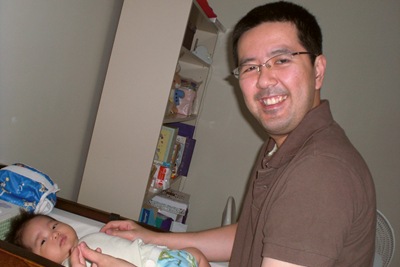 Nathan has grown. I know this for a fact because he can finally fit some of the clothes given to him which he was too small to wear at first. Here he is wearing his funky tie-dye onesie – pressie from his er-chiu. 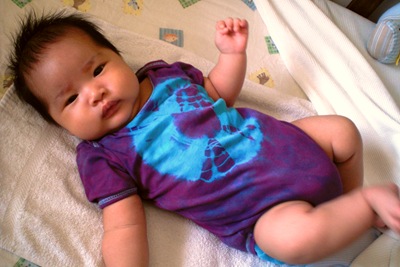 He wore it out on Sunday. It was also the day I decided the road test my Itti Bitti D’lish cloth nappy for an extended session out. We put it on at 9.30am and left for church. He nursed at 10.00am and I put him down for a nap. He slept soundly in the creche room all throughout service with no problems at all. I intended to change him around his next feed before we left for lunch about 1.00pm but we got so caught up getting organised to leave that we forgot. He slept soundly through lunch at the restaurant. Didn’t get a chance to change him until we got home around 3.30pm and I was amazed that the nappy held up all this time with no leaks! I do not intend to let him go for this long again without a nappy change, but good to know that it holds up pretty well. 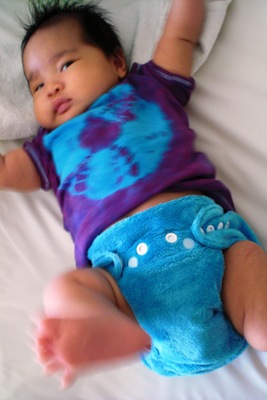 Nathan also experienced his first jab last Friday. It was his 8-week immunisation – one dose of oral medicine and two jabs, one on each leg. It was very distressing for him because he was also tired and hungry from the long wait at the clinic. I wanted to nurse him but you know how it is… you’re always the next one, but the minutes tick on and it’s never your turn. Sigh. The jabs were very upsetting for him but I nursed him straight after and he settled down ok. Here is the evidence of what he had to endure… 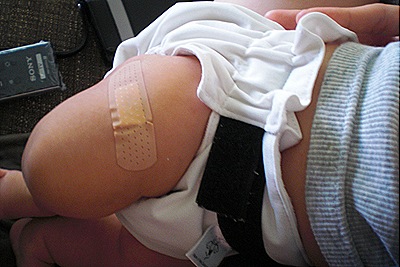 I’m loving my baby sling. I was blessed with two beautiful ring slings. One from my friend Connie in Singapore and one from my brother (Nathan’s ta-chiu). I haven’t really used it for extended sessions outside the house. Been mainly using it to carry Nathan around if he is having trouble settling. It works most of the time and he usually calms down and dozes off not long after a few minutes in the sling, unless he is still really hungry or is really awake and not ready to go to bed. 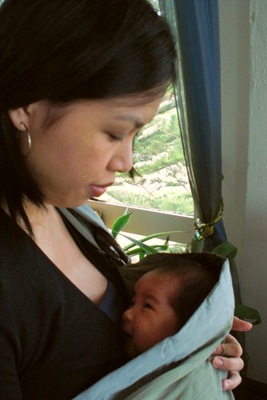 Here is a snapshot of Nathan and mummy – a rare case as most of the time, I’m the one holding the camera. A lot of people say Nathan looks more like me. Do you think so? When I look at his face I can see some features which reflect me, and some which reflect hubby. What do you think? 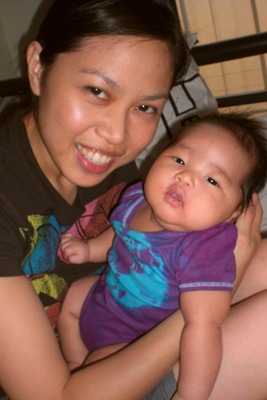 Often people ask me how I’m doing with motherhood. I can honestly say that I’m enjoying it. I used to worry so much about not ever having late morning sleep-ins and interrupted nights (yes sleep was very important to me) but having a baby really changes you. Sure it’s tiring and my eyes are still hurting from being forced to open at the sound of baby’s cry in the wee hours of the morning… but I just simply get up and do whatever I need to do. It’s also fun discovering new things not only about baby but about myself… I didn’t think I might turn into those granola-type mums – you know, with the breastfeeding, cloth diapering and baby-wearing… but like I said, having a baby does change you, or at least reveal things about yourself you might have never discovered otherwise.