People seem to be clamouring for photos… wanting to know how ‘big’ I’m getting. 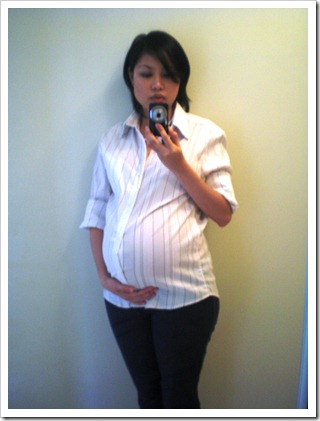 Latest ultrasound - the radiologist was able to capture a shot of bub's face and some of his features. He's getting quite chubby and putting on more fat... very different from the alien-like features from the last ultrasound. 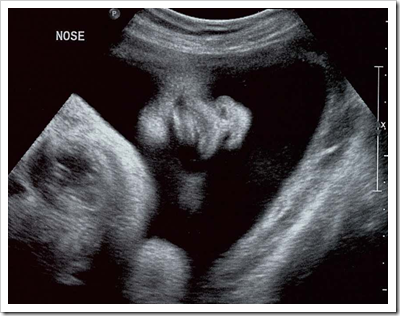 And a bit more of his face… 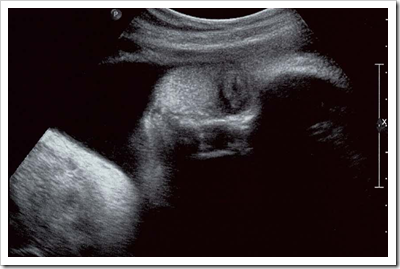 He's now measuring about 40-42cm and weighing about 1.9kg, which is within the normal range (*phew*) one of my fears is having to push a monster baby with a giant head during the birth.

People have been commenting that my belly is very pointy... which has been making the clothes department especially challenging. I'm actually wearing one of hubby's shirts in the photo above.

Some of the lesser known pregnancy 'challenges' I've been facing include:

#1 Sudden leg cramps – especially in the middle of the night (hubs has been very good in his lightning response to such situations - the first time it happened I just suddenly cried out "leg cramp! leg cramp!" and he immediately jumped up and placed upward pressure on my foot to relieve it... almost split second response, wow!)

#2 Swollen feet – especially at the end of the day. My shoes did start to feel tight a few days before, but there was just one day when I got home from work and sat back on the couch to rest a bit before cooking dinner, and I happen to look down at my foot and was just shocked to see the unrecognisable 'elephant feet'. Even hubby was taken aback, but he was very diplomatic in his response to my "look how big and ugly my feet are!!!" lament.

#3 Difficulty putting on pants/underwear – I never realised how much we took this simple task for granted of simply balancing on one foot after another to slip on a pair of jeans/shorts/underwear. Normally we only pause less than a second per leg before transferring our weight to the other leg that we never think of the tremendous balancing power required for this task. Now with my protruding belly shifting my centre of gravity, I usually need to sit down or hold on to something to make sure I don’t topple over!

But don’t stress girls… as long as you have a loving husband who’s there to attend to leg cramps, massage your swollen feet and be ready to catch hold of you just in case you do topple over while wearing your pants… you’ll be just fine!