Deciding where to set up the cot

This weekend’s task centred around assembling this… 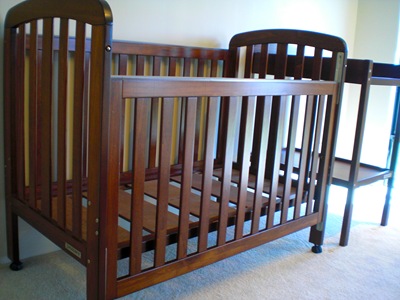 Hubby’s comment as he assembled the cot: “It’s really dawning on me that we’re having a baby!”

So for me it took sorting through baby clothes, and for hubs it took assembling baby furniture and equipment.

We are kind of still debating whether to set the cot up in our room, or establish a separate nursery room. We’ve been hearing pros and cons of both options from various people:

Those voting for having the cot in the same room insist on the benefits of easy access to baby and convenience, especially for night feeds. Those on the other side of the fence are adamant that it’s better to establish a separate nursery from the start to avoid the difficulties and drama of transitioning to a nursery later on.

Both sides of the argument seem valid, but we’re still working out which option is for us.