After polishing the last book off my reading plate, I was ready to dive in for more of Han Suyin.

I hunted this book up at the library… and can I just say how great the library system is here? when I requested the book on the online book search, it said they did not have it but offered the option to place a suggestion on their purchase list. A few weeks later, I received a notification that the book was now available! 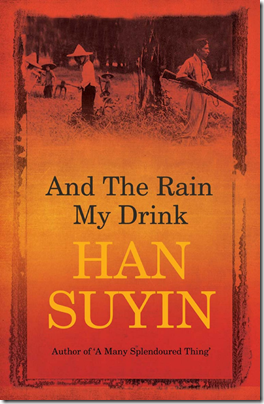 This story was so different from the other one I read by the same author. I was really keen to read this one after learning about the author’s history of how she had to leave Hong Kong and relocate to Singapore. This story revolved around the British colonial period and Malayan Emergency of the 1940s and 1950s.

At the same time with the circus and drama going on in the Malaysian political scene, with old grievances being dragged from the grave and finger pointing games… the historical setting in the book really added some context and background to everything that was happening today.

“…Sudden nausea seized me, as it did so often in these cruel and stupid days in Malaya… The muddles of ignorance, the suspicions based on race, the heavy hand of Emergency Regulations, condemning without trial, needing not evidence but plausible suspicion. And that was enough to detain anyone for a minimum of two years…”

Sounds exactly the same issues around race and the ISA happening today right? Yet this quote came straight out of Han Suyin’s own observations found in this novel.