I haven’t updated you guys about Mishu in a while. So I think that dusty corner of my Mishu posts needs a little visit. 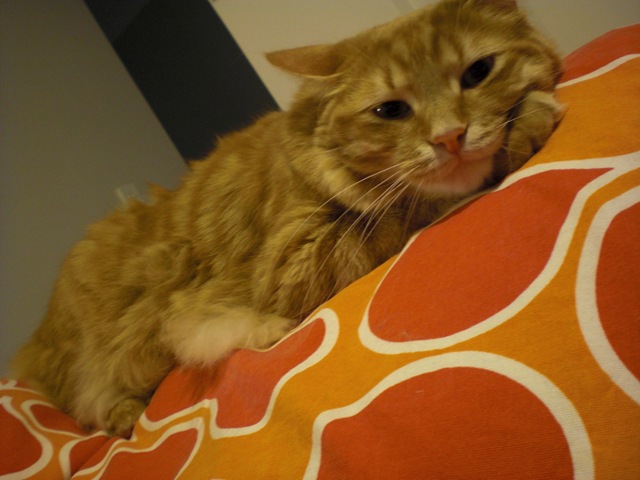 Mishu is doing fairly okay, but he’s acting up a bit in his behaviour. It started when the vet put him on a follow up round of antibiotic treatments just to make sure the infection he had is fully cleared.

We usually put the tablet with a little bit food in his bowl, then hubby coaxes him to swallow it to make sure he eats it, then rewards him by topping up his bowl with the rest of his food.

He went almost three days without food, except for a small bite here and there when we tried to coax him to eat a small teaspoonful here and there. He was being a bad cat. A very bad cat indeed.

Upon consulting the vet, we switched to feeding him dry food only (we were feeding him mainly wet food before) and had to resort to pushing the tablet down the back of his tongue, and holding his mouth shut until he swallowed.

Hubby had the unpleasant task of being the medicine-giver, because he didn’t want me to get hurt or bitten in case Mishu acted up. Turns out Mishu was pretty gentle, and not aggressive at all, though he sometimes does struggle a bit (it’s quite funny to watch sometimes) but you know he definitely hates medicine time. We all had to endure 10 days of antibiotics, twice a day all throughout.

Unfortunately, Mishu started to develop a nervousness and apprehension toward hubs as the medicine-giver. It was very sad, especially for hubs. Everytime hubs walked into the room where Mishu was, Mishu would crouch very still on his cushion and refuse to budge from it. He would no longer play with hubs and even waited until hubs left the room before he ate any food hubs placed in his bowl.

With me, he was still meow-ee, affectionate and playful… even though I would never give him food, because we wanted to be clear of our respective roles. I can tell it’s quite hurtful for hubs, but he still tries his best to be affectionate in his petting and tummy rubs to Mishu. He still seems to dread the possibility of medicine time whenever hubs approached him.

Of course poor Mishu is only a cat, and as much as we try to explain to him that the antibiotics were for his own good and that we dislike giving it him as much as he disliked taking it, he just can’t understand and never will.

He is slowly getting round his distrust toward hubs, but it’s a painfully slow process, for cats are less forgiving than dogs. It takes a lot more to drive away a dog’s love and affection towards you. But cats seem to hold on to grudges for much longer.

I remarked to hubs that what Mishu is doing might be how our own kid might behave towards us someday (although we pray and hope not). We can love them and provide for them and do everything we can for them, but they might respond in ungratefulness instead. We can’t control that.

Perhaps this is how God feels about us sometimes.