Of cars, buses and trains

May 30, 2010
Dear everyone,
I apologise for the 'deadness' of my blog. So much has happened lately, that it has just been to overwhelming to sit down and pen or type down my thoughts. When something new happens, I immediately think "I must share this", but then I get caught up in the wave of everything that keeps happening and happening, that I never do.
Anyway, this morning we did something unusual. We took public transport. On a Sunday. To go to church! (well not all the way, we caught the train up to Bullcreek and a friend picked us up from there).
We banged up our little white 'bun' car a couple of weeks ago. A young driver swerved across from the left most lane to the right most lane (it was a three-lane road), cutting one of the cars travelling in front of us who jammed the brakes suddenly and caused a mini pile up. The culprit then did a U-turn and drove off without stopping.
It was quite a dramatic day. The had to bring a tow truck in, the police and ambulance were also on the scene, and just so much talking talking talking... talking to the other drivers, talking to the police, talking to the paramedics... and after that more talking to the insurance company, filing a police report, which was totally NOT as amusing as our other experience. 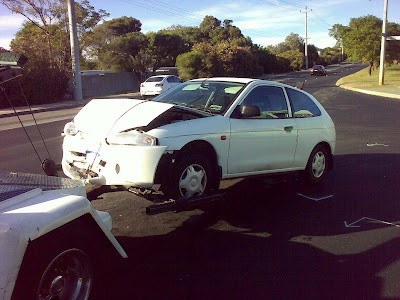 The poor car is currently in the workshop, but in the meantime, we have been already looking around and shopping around for a new car. We were already thinking of getting a new car, but the accident just made things a bit more inconvenient in the meantime.
This is the car we are currently considering... Anyway, back to today. While hubs and I were catching the bus and train to church this morning, it just brought back memories of how we used to go around everywhere in Singapore on public transport... we would be holding hands, walking down to the bus stop or train station, and just sit back as we were being transported around. The scene there was so different, Sundays were just as busy if not busier than on weekdays for buses and trains in Singapore. Almost everybody in Singapore seemed to be out and about kai-kai-ing. Sooo different from the scene in Perth. We were the only people on the bus, and we had no problems finding a seat on the train.
It was fun looking around, watching other people. I caught sight of an old couple sitting side by side on a train. They each had a book in hand, and were contently reading... and they were reading pretty solid books... the man was reading 'Killing Fields' and the woman appeared to be reading a female autobiographical novel type of book. Somehow I really liked watching that scene, and I thought how nice to grow old together like that, and I imagined them sitting at the breakfast table across from each other, talking about what they were reading, sharing interesting snippets with each other... I nudged hubby and pointed out the couple I was looking at, and whispered my thoughts. He smiled and nodded, and commented back something funny.
Despite being car-less, it felt nice sitting next to hubby in the train like that and it somehow made me feel five years younger.