Public holiday in WA yesterday. The hot summer weather was holding up relentlessly. Instead of moping about at home complaining about the heat, we decided to embrace it and go outside. Cycling!

I anticipated that we would be pretty knackered by the time we got home after our afternoon activity. So I had made advanced preparations to make some homemade pizza for dinner. With hubby’s help, all the ingredients were chopped and sliced. Just before we headed out the door, I set the timer on the breadmaker to finish kneading the pizza base dough by 6.00pm. 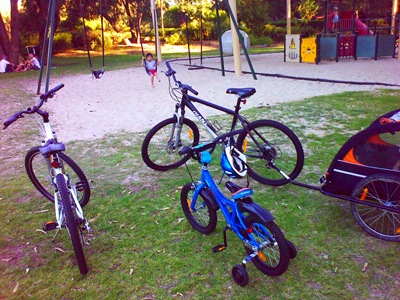 We ventured out on our bikes with Diana’s brood. Here is Christopher all geared up and ready to go. 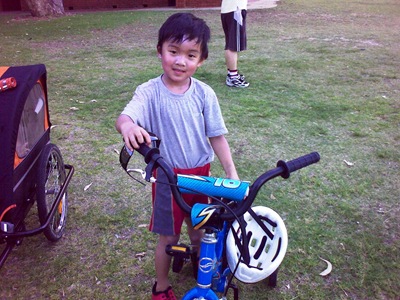 We cycled by Swan River, stopping by three playgrounds which was absolutely essential to the little troops. By the time we decided to call it a day, it was already 7.00pm. The yeast would be working overtime by now… time to head home before my breadmaker is completely submerged under all that dough.

But when we reached home, we found the garage door not working and all the power out in our area. We groped around in the darkness and with the aid of a mini pen-torchlight I managed to locate some matches at the bottom drawer of the kitchen counter.

This was also a time to be grateful for all those scented candles I received at Secret Santa gift exchanges. 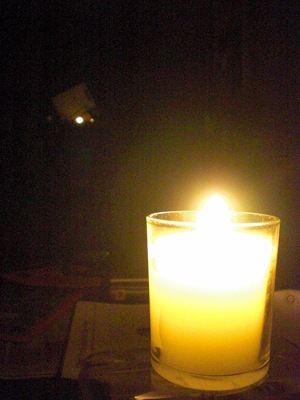 Sadly my dough was in a disparate mess of flour, water and yeast. So instead we settled for a prosaic dinner of Campbell’s cream of mushroom soup with cheese sandwiches, by candlelight.

And where was Mishu all this time? It appears our night prowler seems to get extra prowly in the dark… 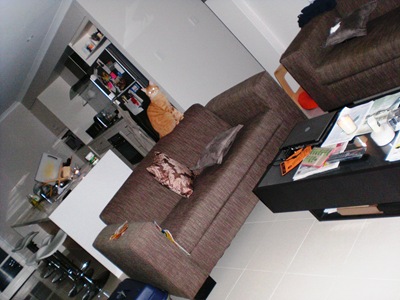 (Caught in the camera flash)

As I ate my soup and bread, I thought of all those power cuts in KK when we would bundle together in my parents’ room and just talk in the dark. Power cuts seem to set off a feeling of cosiness and a sense of family closeness.

The power came back on within the hour… which was good, because as much as I like the cosy feeling it brings on, I did not relish the thought of taking a cold shower.