So what has it been like having Mishu back home again?

Well we just love the little bugger to bits! We’re so happy to have him around looking up adoringly at us at breakfast and dinner time… 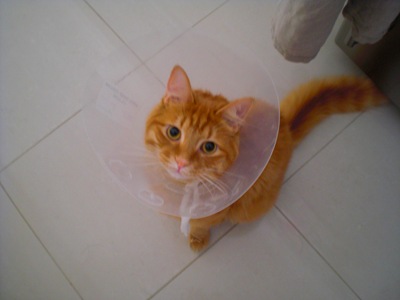 And our little invalid is really milking the sympathy… look at him! This is his “I’m DYING of hunger, feed me!” pose… 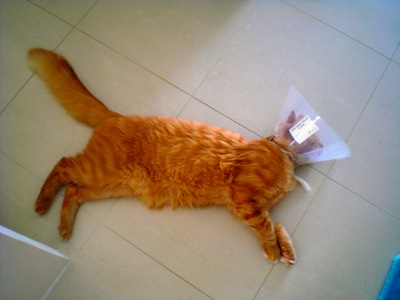 We also need to spoon feed him his dinner now… must be something he picked up during his stay at the hospital.

Mishu is a rather distracted eater. He will chomp on a few bites, then after a while he will walk around or go investigate something. If I’m the designated ‘feeder’ that day, I’ll eventually need to follow him, coaxing him to eat some more. Makes me feel like a parent of a fussy eater kid who can't sit still at the dinner table. 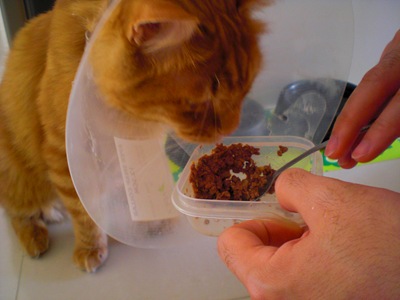 We have now transitioned to spoon feeding him only the first half of his meal to make sure he swallows the antibiotic pills in the food. After that we will remove the cone and let him finish the rest of the food at his own leisure.

Apart from that, lately he’s also into hogging half the space on the couch… I tell you, this fella’ really know how to enjoy! This scenario reminds me of this story I heard about a kid who sleeps in the same bed as his parents but eventually hogs the bed until the parents have to sleep on the floor. 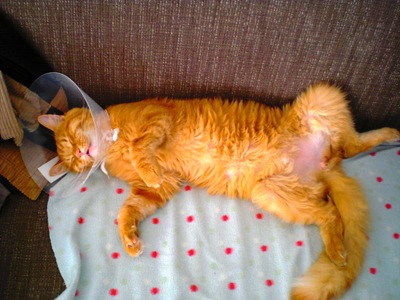 OK, need to end this post now. Mishu is pawing at me to scratch his ear and explaining in piteous meows that he can’t reach it as long as he has to endure this plastic bowl around his head.