One my favourite lunch time haunts is Elizabeth’s Second Hand Bookstore, corner of Hay St and King St in Perth. Even if I don’t plan on buying anything, I enjoy browsing through all sorts of books, new and old, and looking at early editions of classics.

Late last year (near Christmas time), I happened to pass by their bargain bin and decided to pick through to see if I could find any hidden treasures. 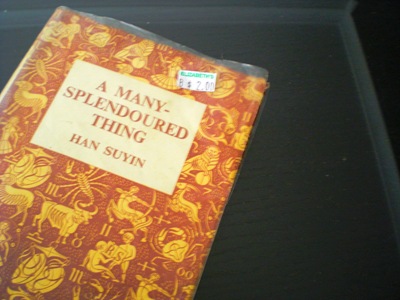 I knew of the story from the movie ‘Love is a Many Splendored Thing’. (If you don’t know yet, I am a sucker for old movies. I still flick to the SBS channel every now and then to see if I can catch any good old classics and was ecstatic at being able to catch Hitchcock’s ‘Psycho’ on that channel recently. I also received a stunned look from my pastor because I knew exactly what he was talking about when he mentioned seeing the exact spot in Hawaii where the iconic beach scene from the movie ‘From Here to Eternity’ was filmed. But I’m digressing…)

This is absolutely one of the best two dollars I have ever spent. I’m savouring every word of the book as I read. Han Suyin is a genius with words. In a few poignant sentences, she describes a scene, a feeling, a thought, and immediately I am transported, and I see the colourful market scene in Hong Kong right before me, smelling the pungent scents, hearing the clamour of buying and selling.

On strength vs. gentleness she writes…

“…you must decide for you are stronger.”

“I think you are stronger.”

“I am not, for I am always on the defensive. And you are gentle, you carry no armour. There is nothing stronger in the world than gentleness. I will follow you.”

There is nothing in the world stronger than gentleness. It sounds like a contradiction of words. But it makes perfect sense.

Here is another quote…

Most people do not wish to remember suffering. My concern is not to forget it. It is not merciful to forget; to obliterate the live sore of remembrance with creeping, bloodless scar tissue. For me always the unabated rawness, the fresh profitable spur of pain. But alas, in vain I wish, for I too shall suffer healing.

Intrigued by this Eurasian author and her tremendous skill with words, I googled ‘Han Suyin’ to learn more. Here are a few things I learnt from Wikipedia and various other articles and websites featuring Han Suyin:

Han Suyin (her pen name) was born Rosalie Elizabeth Kuanghu Chow, 1917 in Henan, China, to a Belgian mother and a Chinese engineer of Hakka heritage. She completed her medical degree in London (1948) and went to Hong Kong to practice medicine.

In Hong Kong she fell in love with war correspondent, Ian Morrison. Their love affair was the scandal in Hong Kong at that time – she a widow with a young daughter, he a married man with children. The affair ended tragically when Morrison was killed while reporting on the Korean War. Han then poured her grief into writing ‘A Many-Splendoured Thing’ as a kind of closure for her – which puts some context behind her quote on ‘remembering suffering’.

In 1952 she married a British Officer from Malaya, Leon Comber, and went with him to Johore where she opened two clinics in JB and Singapore. The clinic in JB is located on Jalan Ibrahim, next to a motorcycle service shop where Universal Pharmacy used to be (I have no clue where this is, but just putting this in for the benefit of those from Johor).

In 1955, Han Suyin played a key role in the establishment of Singapore’s Nanyang University. She was actually offered a role to teach literature which she declined because she said she wanted “to make new Asian literature, not teach Dickens”. Inside the backcover of my copy of ‘A-Many Splendoured Thing’ she wrote…

People often say to me: ‘Why don’t you give up medicine? You write such good English.’ Nothing displeases me more. I am a doctor, not a writer. If I had to choose between the two, unhesitatingly I would choose medicine.

She has written numerous works in English, Chinese and also French, primarily around the cultural and political conflicts in China and East Asia, many of which feature the colonial times in Asia during the 19th and 20th centuries. She is also known to be conversant in Hakka, Mandarin, Cantonese, Malay.

She now resides in Lausanne, Switzerland.

Terror kan this woman? I was like “wauuuuuuuuu…what a life lived!"

If you have actually read through this far, I congratulate you and thank you. I am sometimes apprehensive about sharing this kind of thing (i.e. reading old books and watching old movies) because it might scare some people off thinking I'm some old boring woman. But I can’t help myself. I just have the need to share this.

This is really one of the best two dollars ever spent.

Once I finish this book, I will hunt up for her next book ‘And the Rain My Drink’ where she writes of the Malayan Emergency of the late 1940s and 1950s.

I shall now resume reading my two-dollar treasure while listening to Andy William’s ‘Love is a Many Splendored Thing’.