My own version of 4 Ingredients

Every Christmas, I make it a point to have a special family dinner, whether it’s with immediate or extended family and friends or if it’s just hubs and I.

Even weeks before, I’ll start thinking and looking out for ideas of what special Christmas food project I should try out in my kitchen this year. (Last year I made my own honey glaze ham from scratch)

This year as I ran through the different food ideas in my mind, I thought of the ‘4 Ingredients’ cookbook, a collection of recipes by two Aussie women which require only four ingredients or less.

I myself don’t own the book or have ever tried any recipes directly from the book itself. But I like the concept, some of the best dishes I’ve tasted or prepared myself are simply made up of four to five basic good quality ingredients.

I got this idea from my boss at our company’s Christmas bbq. Just grill, fry or bbq some sliced chorizo, arrange it on top of a slice of cucumber, and top it off with a toothpick to hold it together. Soooo yummy… and you can also try different varieties of chorizo, such as a spicier meat if you prefer a bit more heat to contrast the cool cucumber slice. 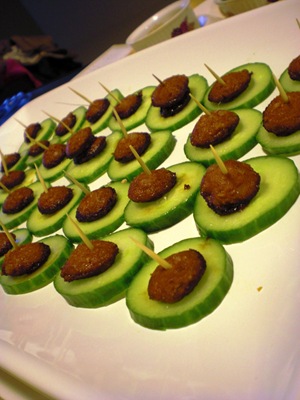 I picked up this recipe from Fast Ed on Better Homes and Garden. It sounds delicious and tastes soooooo good, I tell you! Start with a whole pumpkin and cut out a little ‘cap’ on top like this… 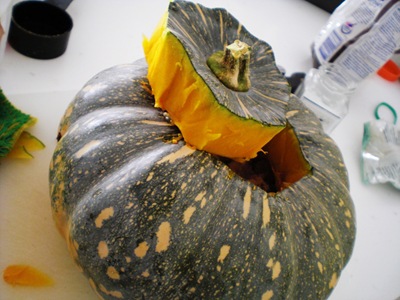 Then chuck in about half a block of butter (that’s around 125g), half a cup of brown sugar, and two teaspoons ground cinnamon. Some other optional stuff you could also throw in is some ground nutmeg and ground ginger (about half or one teaspoon each), but I didn’t add those and it still turned out great. 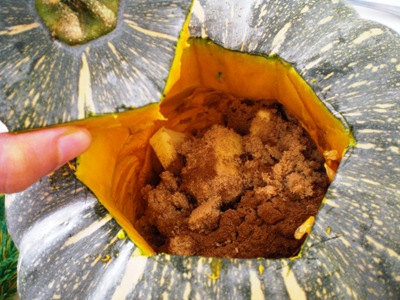 Bake for 1½ to 2 hours in a 180ºC oven. When you lift off the cap, the buttery cinnamon smell just hits you… wow!!! Scoop out some of the pumpkin and drizzle over a bit of the liquid… so good I tell you, so good!

(My friend Rebecca just reminded me that I had missed out an important step: before you put anything inside the pumpkin, don't forget to scoop out the seeds first! Just use a spoon to scrape them out. Thanks Becca! Good thing you reminded me just in case someone decided to try out the recipe and missed this step) 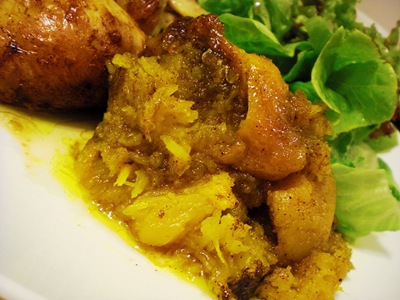 Hubs and I recently watched the film Julie & Julia. Julia Childs is a great icon who popularised French cooking in America in the 1950s. In the movie, I caught sight of a scene of Julie rubbing butter all over a chicken. 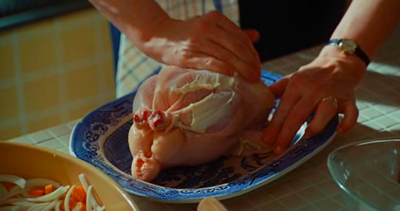 So after that I decided to google it to check out what that recipe was. It looked rather complicated at first, but after breaking it down, the recipe at its core required only a few basic ingredients, but just needed a bit of time in preparation and monitoring the cooking process.

First, wash a chicken in hot water and pat dry (they really emphasised this part in the recipe, so I thought I’d better not leave it out). Then rub the cavity with some salt and pepper, and stuff in some chopped onions, carrots, celery leaves and some lemon slices.

With the stuffing, I found different recipes varied this part a bit… some said to quickly fry the vegetables in some butter and thyme or mixed herbs then stuff them in the chicken; some omitted the frying part and just said to put the vegetables straight into the chicken. I decided to opt for the former, and do a little bit extra with the pre-frying since it was such a special occasion.

Truss the chicken legs together, then rub some salt and pepper and a couple of tablespoons of softened butter all over the chicken.

I know the chicken sounds complicated, but as I said when you break it down, it’s basically: Chicken + Vegetables + Butter + Lemon

The rest is just the technique and order of putting it together.

And the result… super tasty and tender chicken! 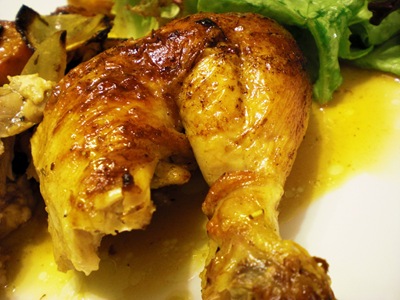 And finally for dessert…

My last attempt at making tang yuan was back in June the year before, which was no where near the date of the Winter Solstice festival. This year we missed the actual day (it’s always three days before Christmas). But I thought “better late than never!”. So I decided to prepare this on Christmas Day itself for a Christmas lunch at our friend’s place.

So in way, we still upheld the tradition in some way by eating this tang yuan together with people from our ‘church family’.

Again the ingredients are simple, but just require a bit of time in the preparation and process.

The ingredients for the ‘dumplings’ are basically glutinous rice flour, water and some food colouring. Rough measurements are about a cup of flour and about half a cup of water. Always put the water in a bit at a time as you mix the dough until it comes together .

Tip the dough out to a surface floured with more glutinous rice flour and keep kneading it until becomes a play dough like texture. Add a few drops of food colouring at this stage and knead it in… again a bit at a time until you get the shade you want. I usually divide the dough to allocate different colours for each.

After that it’s just simply pinching off pieces and rolling them into gum sized balls. I used to help my mum with this in the kitchen as a girl, so this is definitely a great activity for kids to get involved in.

When the balls are done, drop them in a pot of boiling water… when they are done, they will float to the top of the water. 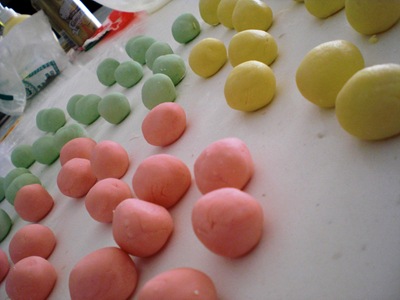 For the ‘tang’, its essentially sugar and water. You can use rock sugar or gula melaka and add in some ginger slices for a bit more taste. I also add some red dates.

Is that four ingredients? Let’s see… 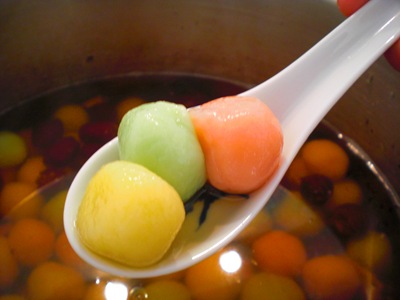 Looks like I can write my own 4 Ingredients recipe book too! I’m sure so can you.