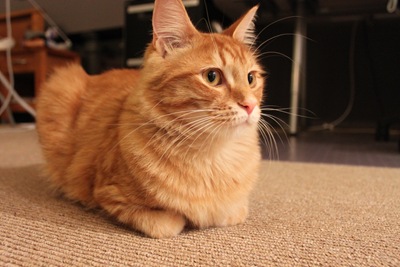 We've had Mishu for almost five weeks now, and day by day, we see more and more of his personality is coming through. He really likes being around us, and whichever part of the house we're hanging around, he won't be too far away. But it's different from a dog. A dog will immediately jump up and follow you closely at your heels whenever you shift your position, even if it's just a milimeter away.

Mishu's movements are more subtle, for example when getting up from the living area and to go the bedroom to put the laundry away, if I'm away for more than 1-2 minutes, not very long later I will see an orange creature lurking in the doorway, peering about curiously. If he is especially curious, he will give a meow as if to enquire what I'm doing.

Here he is hanging around in the living room on the couch arm rest. That orange cushion is his own special private cushion. 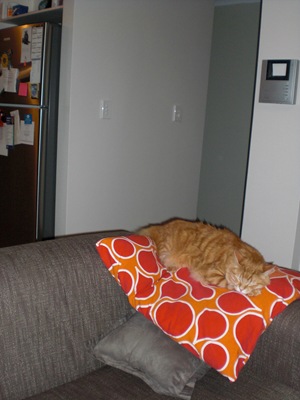 A close up pic of him on his cushion: He looks so cute until cannot tahan sometimes... don't you feel like so *gaaarrggghh*... wanna hug him to bits *eeesh* 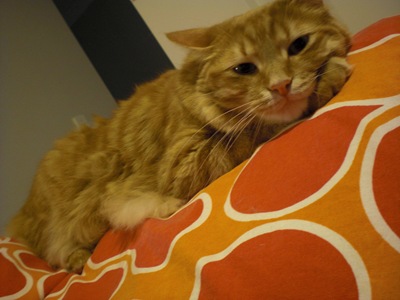 He moves around the house at his own leisure, and sometimes ends up in the oddest places. 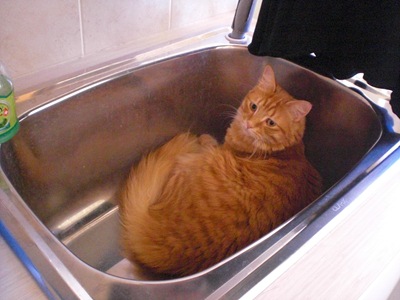 But we don’t allow him on our bed, and not on the dining table, or the kitchen counter, and he is not allowed inside cupboards and cabinets, which he seems to have an obsession with. The moment you open a cabinet or cupboard, he will want to climb inside.

Recently he started to teach himself how to push the linen cupboard doors open, so we had to put a stool in front to block the way, hopefully he’ll eventually forget about it and we can avoid him getting into a habit with that.

Every morning when he hears us stirring and moving around as we get out of bed, he'll appear beside us and start meowing for breakfast and some attention. Interestingly, he doesn't meow to wake us up at a set time but will only start meowing when he hears us waking up. So on Saturday morning when we sleep in a bit longer, we don't have to worry about him bugging us for food and love.

On some mornings if I creep out of bed quietly, I'll catch him still sleeping. He sometimes sleeps like a person on his back like this. Cracks me up every time. 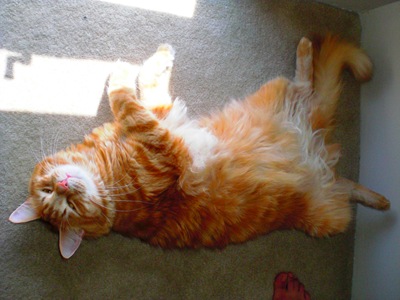 Many people ask me why we call him Mishu. Well when we come home at the end of the day, he'll be there waiting at the door for us and we'll say to him "we mish you, we mish you!" and he'll aways respond in some way, either meowing, lying on his back for a tummy rub, or rubbing his cheek against our leg. So that's why we call him Mishu! 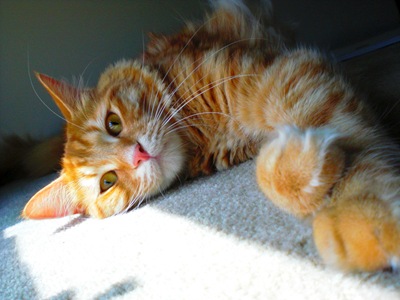 Aaaaahh, Mishu... you really are the cutest cat!