If you see a something strange in your cat’s butt – don’t panic!!!

What is it about children and pets that they just have this innate desire to put strange things in their mouth?

My friend Diana recently twittered that she had caught her baby girl putting a live ladybug, a clump of hair, egg shells, lego pieces, paper, plastic and tissue in her mouth. Really need to keep an eye on her!

In our case with Mishu… the ‘thing’ in question was rafia string. Unfortunately by the time we realised it, the thing had already gone through his digestive system and we found out because it had already emerged at the ‘other end’.

I was at the office on Thursday morning when I received a frantic phone call from hubby who informed me that our cat had a piece of string hanging out from his rear end.

Apparently this is what happened: hubby was just seated at the computer, trying to configure something with our internet, when Mishu walked past him toward the kitty litter to do his usual morning business after breakfast. Minutes later he saw a strange sight of Mishu moving back across the corridor, bum to the ground while using his front paws to drag himself forward, bit by bit. Hubby got up to investigate… Mishu was heading toward the kitchen, still doing his strange butt movements, So hubs immediately caught hold of Mishu to see what the issue was down there. Minutes later I found myself on the phone with him discussing what to do when you find a piece of string hanging out from your cat’s butt.

We were quite concerned at first. So I rang our friend who is a vet who was completely unfazed. Finding a piece of string in your cat's butt must be a common everyday occurrence. Basically there was nothing much do but let the thing pass normally through his system.

Hubs went through an exciting time cleaning up the trail left by Mishu’s string, then he also decided to give him a bath (hubs thought, since he's going to clean him down there, might as well just make a thorough job of it once and for all), as well as snipping off the excess string trailing behind.

Poor Mishu! I’m sure he had no idea why he was made to go through all this ordeal. But he was perfectly alright. Thankfully by the next morning, we found remaining string buried in the kitty litter with the rest of his business. 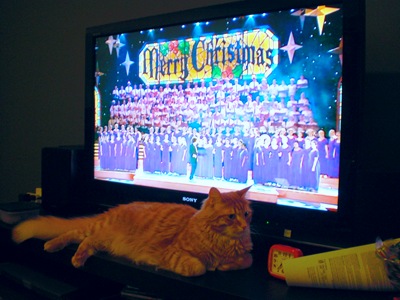 (Big thanks to our friend Kin for her calm and cool advice!)