June 14, 2009
Here is the recipe for the homemade prathas I made yesterday

Sift flour, baking powder and salt together into a large bowl. Make a well in the centre, add the water in and gradually incorporate with the flour.

Turn the dough out onto a lightly floured surface and knead for a few minutes. Shape the dough into a ball and let it rest for half an hour, covered in plastic wrap.

Divide the dough into approximately 6 pieces. Roll a piece of dough out to 3mm thick disc. Brush oil or ghee over the top. Make a light incision from the centre to the edge. Lift the dough and fold inwards at the incision until you have a layered cone. Hold the cone pointy side down, then use your other thumb to push the outer layered edges into the centre of the cone until you have a ball. Repeat this process or the remaining pieces of dough. Cover the dough balls with a clean, damp kitchen towel and let them rest for about 30 minutes to one hour at room temperature.

On a lightly floured work surface, flatten a dough ball with your palm and roll it into a 3mm disc. Heat a pan or skillet, lightly oil and cook each disc until golden with occasional lightly blackened spots (about 2 minutes per side). 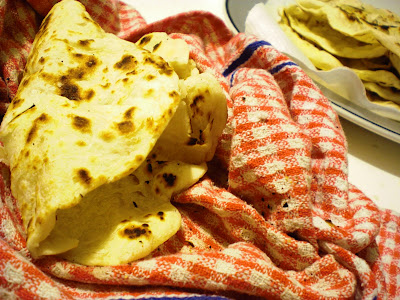 The prathas are pretty much ready to eat at this stage. But if you'd like to add a final finishing touch...

Wrap the cooked pratha in a clean kitchen towel, then 'fluff' it by smacking your hands together with the bread inside. This is said to make the bread super light and flaky. Serve immediately after 'fluffing'.